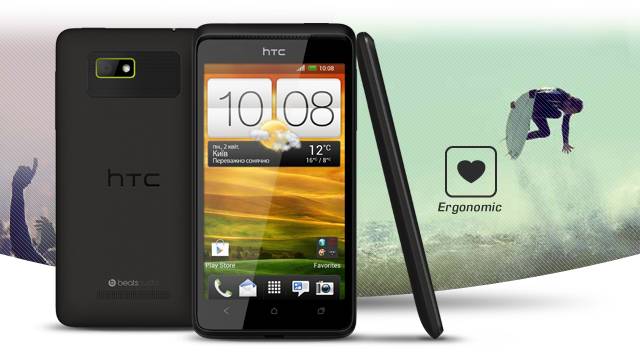 Without much fuss or fanfare, HTC has put up its new mid-range smartphone on some of its European websites. However, the spec sheet for the dual SIM HTC Desire 400 varies depending on where you look. The only thing sure about it is its dual SIM support.

The HTC Desire 400 suddenly popped up on HTC’s Russian and Ukranian websites out of the blue. The two don’t see eye to eye on some of the phone’s features but they do agree on some aspects. Both say that the smartphone sports a 4.3-inch WVGA screen, probably around 800×480 pixels, has 1 GB of RAM and 4 GB of internal storage. And, of course, both agree on the presence of two SIM card slots.

They diverge a bit when it comes to the processor that powers the device, with the Russian site claiming a more powerful 1.2 GHz quad-core Qualcomm Snapdragon 200 while the Ukranian version has a lower 1 GHz dual-core Qualcomm CPU. They also differ on the rear camera, with the Ukranian version pointing to a 5 megapixel sensor and the Russian one having 8 megapixels. Interestingly, HTC Russia website boasts that the device also sports Beats Audio, which is quite a claim considering recent events surrounding the two companies.

It is possible though highly unlikely that these are two distinct variants of the HTC Desire 400. Unfortunately, we’ll just have to wait for an official announcement, not to mention pricing and availability details, to solve this double vision mystery.