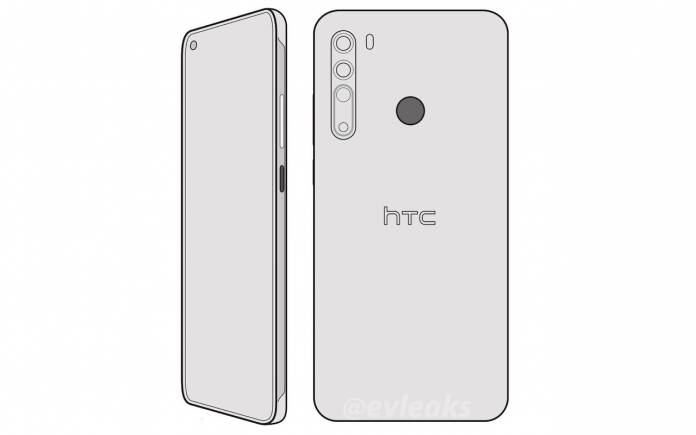 The latest major Android phone offering from HTC we featured here was the HTC Desire 19s. It was launched in Taiwan with triple rear camera setup. Up next is the HTC Desire 20 Pro. It is said to be introduced as another mid-ranger but with the Pro in the name, we can expect an almost premium device. We featured the Pro back in April, describing it as looking like a combination of the Xiaomi Mi 10 and the OnePlus 8.

There is no official announcement yet but we’re anticipating the Taiwanese tech giant will launch something new soon. The mid-range phone is said to be powered by at least 6GB of RAM, Qualcomm Snapdragon 660 or 665 chipset, and Android 10 out of the box.

This HTC Desire 20 Pro has been rendered recently. Master leakster @evleaks (Evan Blass) won’t be last when it comes to yet-to-be-announced devices. The image above shows a phone with a quad rear camera system and a hole-punch front display. The punch-hole is obviously for the selfie camera.

The specs of the model were based on some information discovered on the Google Play Console’s Device Catalog. It is most likely a mid-ranger smartphone so don’t expect any premium flagship from the brand soon. (Although HTC is always welcome to surprise us.) Another XDA dev confirmed related information about the new addition to the HTC Desire lineup.

HTC’s next phone is believed to run on a 1.8GHz octa-core Snapdragon 665 processor and 6GB of RAM. It will probably come with a display with some 2340 × 1080 pixel resolution. Details are scarce but will share with you soon once we learn more.