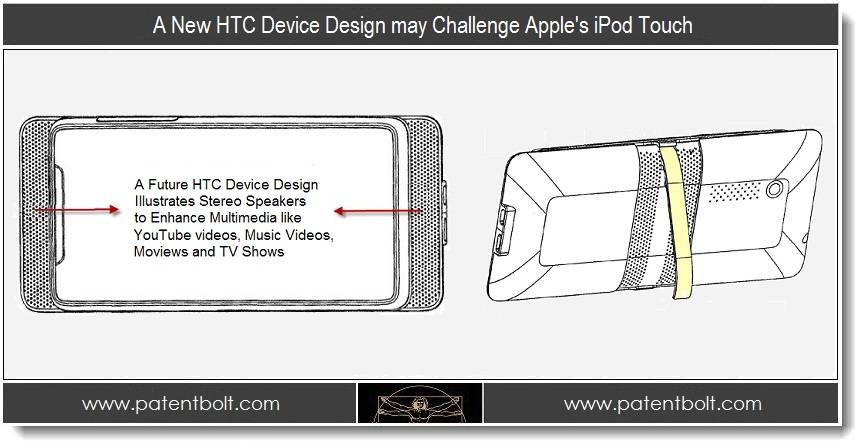 I’ve always been a huge fan of HTC’s build quality from the moment I received my Nexus One, the Sensation, and even more so when I enjoyed some hands-on time with the new HTC One X. Today though we have some interesting news about an upcoming HTC device that isn’t a smartphone, and instead could rival Apple’s iPod Touch and offer much better audio than anything from the fruit company. If the patent designs shown below are any indication HTC is looking to design a pretty awesome multimedia device.

Detailed in full by Patentbolt is an unknown HTC device that was filed back in 2011 and just finally making its way through the patent offices. The device appears to be very similar in design to most of their smartphones only both the top and bottom sides of the front face have large, stereo speakers. Then around back we have two more sets of speakers for true stereo surround sound. To cap everything off it has an awesome kickstand like the original HTC EVO 4G, and it appears to also offer a camera on the rear. 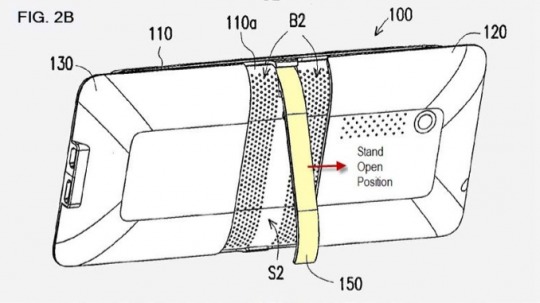 This could very well be a unique smartphone now that we have on screen controls with Android 4.0 Ice Cream Sandwich and can use that Bezel space for speakers, not to mention HTC buying up Beats Audio. Only problem is the patent doesn’t mention standard wireless radios used in smartphones, only Wifi. If they packed all of that and Android 4.0 ICS into a Beats Audio-enabled media player with a crisp 4.5-inch 720p HD screen and offered stereo sound front and back for $249 I’d want one immediately. Would you?

While the image above from PatentBolt is only patent drawings it appears to have micro-USB and possibly a micro-HDMI out port on bottom, the kickstand for hands-free watching of videos or movies, and then a 3.5 mm headphone jack for times you don’t want to blast all four of those speakers. This would be great for Android gaming, watching YouTube, sharing videos or clips with family and friends and more. Samsung has a few Galaxy Players that are similar to the iPod but the idea hasn’t been widely adopted.

It is an interesting design that is for sure. With HTC owning Beats Audio, buying MOG music streaming, already offering HTC Watch movies, and possible being Sony Playstation certified in the future they could produce a pretty awesome little device if you ask me. With most people using their smartphone as their iPod or music device would you consider buying something like the above shown device from HTC?