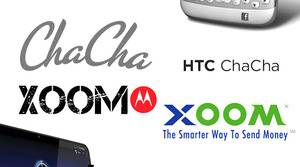 Looks like both HTC and Motorola have lawsuits coming at them this week over the names of some recently announces devices. If you have ever heard of, or used ChaCha before then you probably could see this Lawsuit coming from the day HTC announced the ChaCha. Apparently there is a company called ChaCha that is one of those Question Answering Services. They have recently filed lawsuits for trademark infringement on HTC over the use of the ChaCha name. If you’d like to know more or see this “FaceBook Phone” in action here is our HTC ChaCha Hands-On.

After doing a bit more research it looks like ChaCha Search Inc. holds the trademark for the name in the U.S as well as Europe. Doing a quick Google Search for ChaCha brings up their site as the first search results. Things aren’t looking good for HTC and this “Facebook Phone” already. ChaCha has put lots into this name, it even has it’s own Mobile Site and Android/iOS App.

Next up on Judge Judy we have Motorola and the Xoom that I’m sure you all know plenty about. Looks like Motorola has it’s own problems with the same trademark infringement lawsuit. The Xoom Corporation is a Worldwide money sending service that is based out of California. They also own the trademark to “Xoom” and have been operating under that name since as early as 2003. This news comes as a shock and a blow to Verizon and Motorola I’m sure. As this is the launch day for the Xoom. See our Motorola Xoom Review here if you’d like to see more about it & Android 3.0 Honeycomb. News like this just seems crazy. Surely these huge company’s do a little research into names before they announce or launch them. I found both companies with a single Google Search. It makes you start to wonder if Motorola & HTC don’t really care and just expect to get hits with lawsuits but continue anyways. We at AC will be sure to keep an eye on this story and bring you any new info as it comes in.