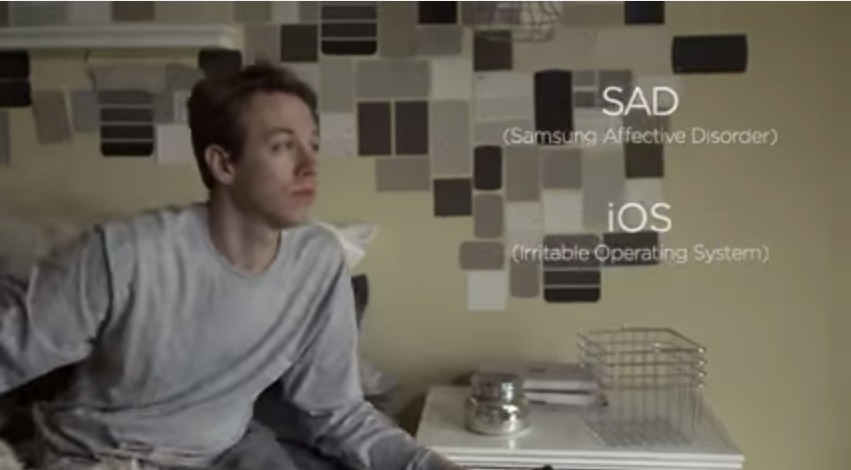 When you make ads that poke fun at your rivals, sometimes it can hit the mark and be hilarious rather than catty (see early Samsung ads mocking Apple) or it can totally fail and not be funny at all (see latter Samsung ads mocking Apple, still). Based on initial feedback to this new one from HTC, it looks like it fall under the second category with their “Cellami” YouTube video, which mocks both Samsung and iPhone owners.

HTC invented fictional diseases that are not even subtle digs at Samsung and Apple: “Bi-phonal Displeasure Disorder”, SAD (Samsung Affective Disorder), and iOS (Irritable Operating System). It then gives a supposed cure (fictional too of course) called Cellami (metalidone boomsoundide), but warns that there are numerous side effects like weight gain, permanent thumb loss, blue teeth, oily plastic discharges, etc. The ad features a pale, wan, man who’s obviously “sick” with the aforementioned diseases and is undergoing the Cellami cure.

Of course, the ad’s kicker is that if you’re using their newes flagship, the HTC One M9, then you wouldn’t need to undergo treatment and suffer from the seemingly horrible side effects of Cellami. They claim that you will not be afflicted because “your phone is the best” so you can just “go enjoy your life”.

Reaction to the ad has been…well, sad. Their attempt at being funny ended up with them trying too hard, peppering the ad with all the latest “in” terms and cool-sounding references, but it still falls pretty flat. It’s like your uncle trying to be cool by constantly saying “what the kids today are saying” but ends up sounding and looking, well, uncool. Maybe better luck next time, HTC. Too bad, the One M9 is actually a pretty decent phone. Maybe not the best as the ad says, but still deserving of a much better ad than that one.