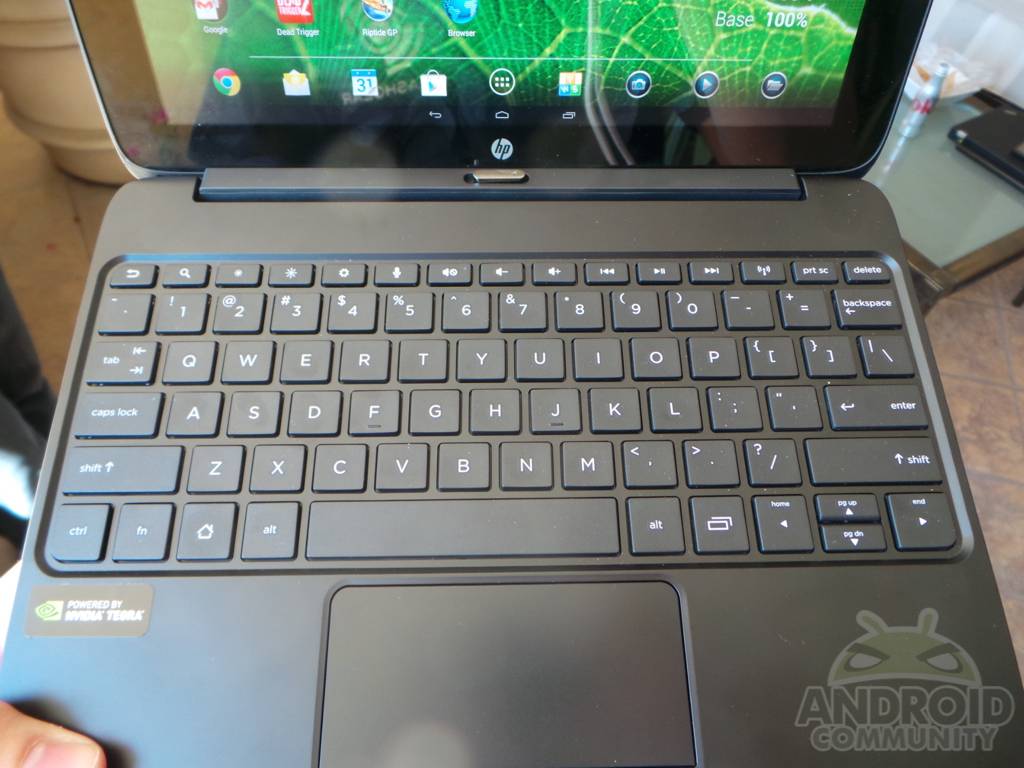 Last week HP announced their second Android tablet, the Slatebook x2, with a full 10-inch display and some serious power under the hood with NVIDIA‘s quad-core Tegra 4. While it won’t be available til August, today we’re getting up close and personal with the new Tegra-toting tablet. With a Transformer-inspired design, Android 4.2 and more you’ll want to take a peek below.

Below we have plenty of hands-on pictures, details and thoughts on the build quality, as well as a quick video sample comparing the Slatebook to Google’s Nexus 10. For now lets run down the specs again real fast. HP’s Slatebook x2 comes with a 10-inch 1920 x 1200 full HD display, Android 4.2 Jelly Bean, NVIDIA’s quad-core Tegra 4 chip (one of the first to market with T4) as well as 2GB of RAM and 16GB of internal storage.

That isn’t all it has going either. The included keyboard dock houses an additional battery for longer usage, especially with gaming thanks to that Tegra 4 chip, and the keyboard dock obviously gives you that full laptop-like experience. It also houses a full size SD slot for expanding storage, USB 2.0, and more.

Today at CTIA the folks from NVIDIA were nice enough to let us get a peek at their Tegra 4 quad-core processor hard at work in HP’s new device, and were showing it off against the Nexus 10. While the video below is just one demo, geared for a specific target, it clearly shows the Tegra 4 and HP’s slate blowing past the Nexus 10 in benchmark comparisons. Loading multiple pages in a row it completed the test nearly twice as fast. Pretty impressive!

One of the other nice things here is the slate is running a bone stock Android 4.2.2 Jelly Bean build, comes out of the box with Chrome Browser, NVIDIA Tegra Zone for some stellar gaming, and much more. While we only had a limited amount of time with it, the slate certainly shows promise. It looks like HP is ready to get into Android tablets much more than before.

The slate is well built, feels durable, but was a little heavy thanks to the aluminum design. The dedicated power and volume buttons being flat were a nice touch, and we also are huge fans of the front facing speakers on board. Something all tablets should have. We couldn’t help but notice the design seems geared towards users keeping it in the dock, and it wasn’t quite as pretty with that odd ledge on the bottom edge of the tablet where it docks into the keyboard.

We’ll need more time with it, and surely will be checking it out in depth once it becomes available. Are you interested in a Transformer competitor? Stay tuned for more news from CTIA 2013.