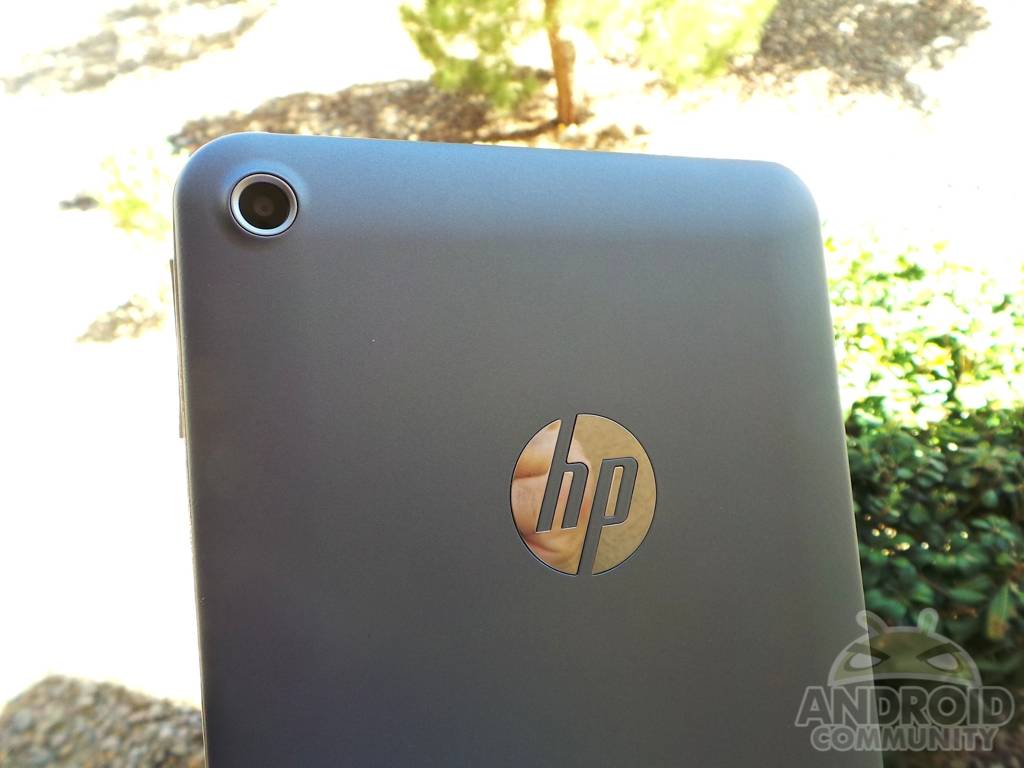 We’re taking an in-depth look at the HP Slate 7, the company’s first foray into the world of Android. If I still had my HP TouchPad running Android 4.2 Jelly Bean instead of the awful WebOS, I’d surely compare these two devices. Earlier this year at CES HP stunned the Android world by announcing their first Android-powered tablet, aimed for the Nexus 7, and we’re going to give it a full rundown below. Can this compete with the Nexus 7 and other Android slates, or is another firesale coming soon? Read on to find out.

The HP Slate 7 entered the market a bit late, looks exceedingly similar to the Nexus 7, but has some stunning hardware and great build quality to make it stand against the rest. Oh, and unlike their first attempt at the tablet market it actually runs the world’s most popular OS. That being Android, only here we have 4.1 Jelly Bean.

This device is all around a better tablet than HP’s last attempt. Everything about the hardware is improved. Gone is the cheap plastic, and we have a nice brushed aluminum design and a soft-touch rubber back. It has a 7-inch display with 1024 x 600 pixel resolution, (more on that below) a dual-core 1.6GHz Cortex A9 processor with 1GB of RAM, and comes with 8GB of storage. You’ll also find Beats Audio integrated with a selection of audio optimization options as well as two different color iterations – one gray, the other as red as the Beats logo itself. 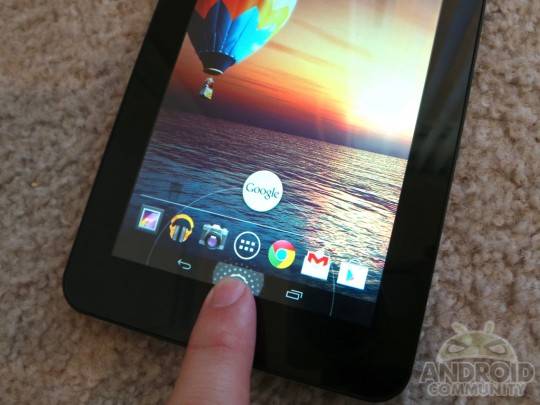 The Slate 7 looks very similar to the ASUS competition, right down to the overly large bezel around that 7-inch display. Sadly the resolution is lower and not HD, the processor is a dual-core (instead of a quad-core Tegra 3) but in return they do offer a micro-SD slot and a rear camera. So there are a few trade offs when looking at this vs the Nexus 7. HP wants to ask $169, but for a few more bucks you can get the up to date Nexus 7 with much more power.

The entire design is quite pleasing. I’m actually a huge fan, although it’s a bit on the heavy side. An aluminum ring around the edges feels durable and of good quality, and the soft-touch textured back is a refreshing change of pace from the cheap plastics and cold aluminum of late with others. Up top we have two hex screws, the micro-SD slot, 3.5mm headphone jack, a microphone pinhole, and a nice aluminum power button. It’s easy to find and press, and feels good.

Then on the sides we have the same brushed aluminum ring, but the sides I can feel the rough corners a bit between the ring and the soft-touch rubber-like back. With nothing on the left we have a volume up/down on the right and micro-USB on bottom for charging. As well as two stereo speaker grills that put out decent sound thanks to Beats Audio. The sound isn’t as good as the TouchPad, and I feel like it’s only software tweaks, as the audio output was rather weak.

To be honest this is one of the most premium feeling slates in the 7-inch form factor we’ve felt. On par or slightly above the Nexus 7. Nothing else compares, even more expensive tablets from Samsung. HP did a great job here. That’s for sure. but… but then you turn it on and have to deal with a terrible low-resolution display. 1024 x 600. Something we’d see from 2010. I don’t want to go on a rant here, but 720p is essentially required these days. The screen was terrible, colors were dull, brightness wasn’t that great, angles were poor. Oh and did we mention the resolution. Nuff said!

Another important factor here with the Slate 7 is the Android version. We’re running on a slightly dated version of Android 4.1 Jelly Bean. We still get all the project butter speed improvements, and the latest general look and feel, but it should be on Android 4.2, or at least have an update coming soon. This is another area the few dollars more you’ll spend on the Nexus 7 will come in handy. Always having the latest OS straight from Google. 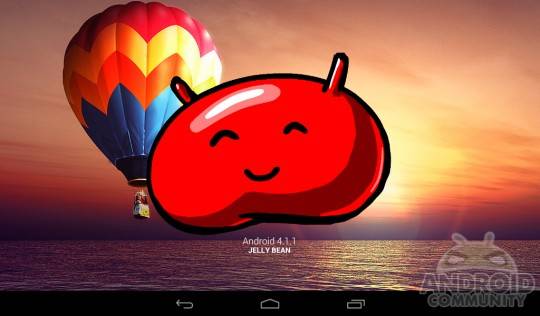 That aside, the Slate 7 does run a completely stock and vanilla version of Android 4.1 Jelly Bean. There’s no odd changes, weird UI elements like Samsung’s TouchWiz, or anything. It’s stock, smooth, and beautiful. And that dual-core keeps it running rather smooth. Another plus is the lack of bloatware. There’s an HP ePrint application, but that is all. No Verizon junk or apps we won’t use, like other manufacturers often do.

Project butter, expandable notifications, and of course Google Now are all present, which is nice. Then there is a dedicated Beats Audio control panel in the settings pane, but we’re still debating if this is a gimmick, or something that actually boosts quality. It’s a fancy equalizer. Sadly we had some odd quirks here and there. Take a look at the Quadrant benchmark screenshot below for an idea of what we mean.

Overall the software is, well, just what we expected. Stock Android 4.1 Jelly Bean for the most part. It’s smooth, stable, works for what we have, and games played with ease. Sadly no Tegra games, since this is a random dual-core, but it’s still not bad. There’s 1 more reason to get the Nexus 7, sad to say.

Just for fun, we wanted to run a few benchmarks and test the 1.6 GHz dual-core under the hood. While daily use is fast and smooth, we weren’t expecting much with these results. So they came in about where expected. Nothing fancy here, but then again we’re only paying $169 for this little slate. So enjoy what you’ve got! 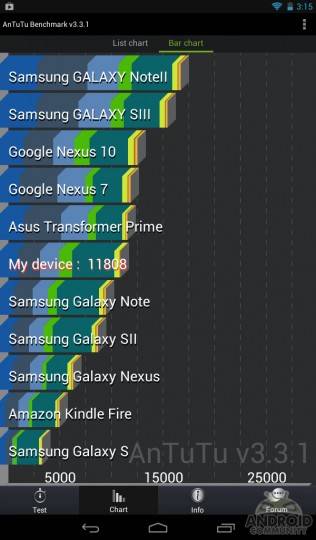 Comparable to the Nexus 7 in some like AnTuTu, but overall it just won’t match up in daily use or while gaming. Big name titles had a little lag, and playing Asphalt 7 I noticed considerable lag, sadly. The Tegra 3 it’s buttery smooth. I feel bad comparing the two, but that’s what they were aiming for. Right? Speaking of quirks in the OS. Quadrant runs on EVERYTHING we ever test. Everything. Except here with the Slate 7 two different versions still have graphic glitches. This was our result, no matter what. 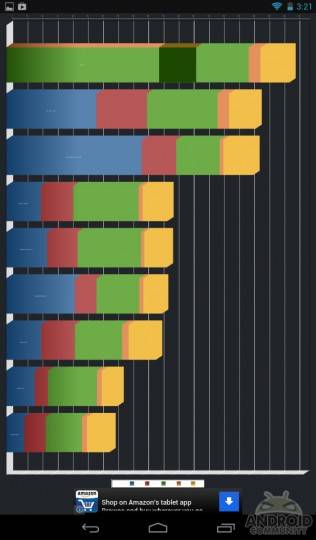 Unlike the Nexus 7, HP outfitted the Slate 7 with both a front and rear camera. They aren’t anything great, but at least we have the option. a VGA front works for blurry self portraits, and the rear 3 megapixel camera was mediocre at best. Low light was awful, as was whatever that attempt at auto-focus was. It’s there if you need it, but my smartphone will do just fine. Thank you very much. 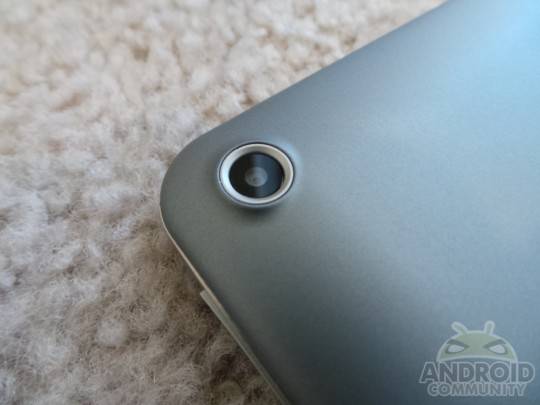 Do you really want to be that guy taking pictures with your tablet? If so, here’s a few samples of what the camera is capable of. Just make sure you hold still and have enough lighting to get the job done.

Then the battery life is another story here. HP promises we’ll be able to enjoy about 5 hours of continued use. Which to be honest is middle-of-the-mall in terms of what the competition offers. It’s only 3,500 mAh. The DROID RAZR MAXX HD is 3,300 mAh, and it’s a phone. That’s my point! However, some almost continued use of Netflix, a few games, and browsing the web it actually lasted nearly 6 hours, so that’s a plus. It isn’t the best, but certainly isn’t the worst. Have the charger nearby. And remember it might be micro-SD, but you’ll need the large HP adapter unless you want it to take forever. Phone chargers don’t have enough output to get the job done quickly. 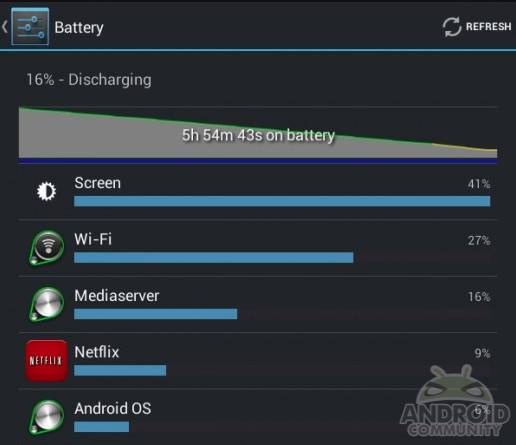 I tried to be nice throughout most of this article, and could have compared it to some cheap Acer or Lenovo tablets instead of the Nexus 7, but the Nexus 7 is the ideal 7-inch Android tablet. For $169 the HP Slate 7 offers a somewhat compelling product. It’s slightly cheaper but offers a micro-SD slot. The screen is low resolution, and the software isn’t quite up to par and was glitchy at times. For $169 it’s a good deal overall, but compared to a $199 Nexus 7 there’s just no reason to skimp that little bit. 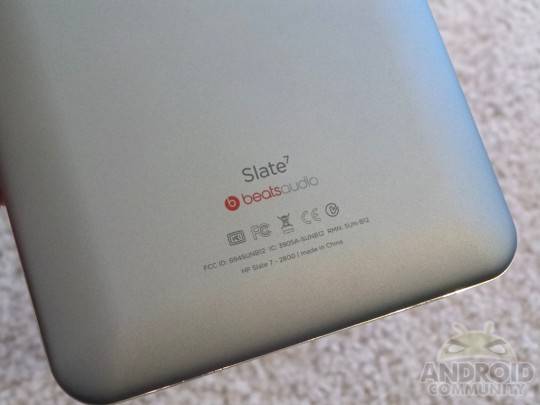 HP made no attempts to offer a really good product. This tablet is mediocre and okay at best. They didn’t attempt to smooth the edges, the battery could have easily been bigger, or at least make the slate thin if you’ll use such a small battery. Then of course that horrid display. HP should know better. The 1024 x 600 resolution display was a killer. In a time with 1080p becoming the norm, and 720p being mid-range. We’d have to make that categorize this as a low-end Android tablet.

Keep the $169 price point in mind if you’re really on a budget, otherwise save up the little extra for the Nexus 7. There’s no other way to spin it, sadly. I sense some restructuring in their tablet plans coming up quick.