Whoa! It appears that HP is looking to possibly mount a comeback because an Android 4.0 Ice Cream Sandwich powered HP Bender smartphone has been spotted in a few benchmarks. HP could be looking to start up right where webOS left off and switch gears to the wonderful world of Android — just like they should have done years ago.

Our good friends from SlashGear said it best this evening, when they mentioned “We’re back, baby” in regards to HP. What they’ve been tipped off with today is some GLBenchmarks showing what appears to be an unknown HP smartphone rocking the one and only Android OS.

According to the leak this is an HP smartphone with the codename “Bender” and it is running on Android 4.0 Ice Cream Sandwich and is powered by the Qualcomm Snapdragon dual-core S4 processor too. Something we haven’t seen in an HP device. This has literally just hit the wires so we are still digging for additional details. Take a peek at the benchmark results below. 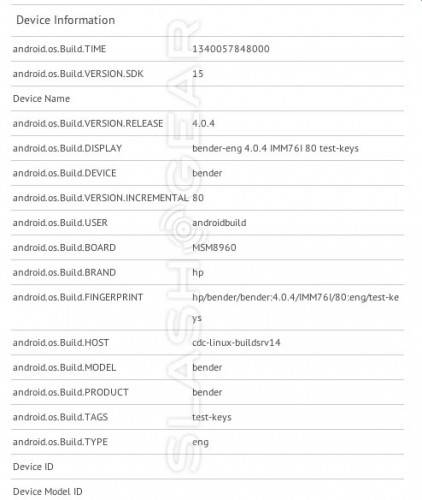 Clearly we see everything mentioned above. Running on Android 4.0.4 Ice Cream Sandwich, and oddly enough the resolution is listed as 1366 x 720 — leading us to believe this could very well be a tablet too. Many Android smartphones have recently launched with 1280 x 720p HD resolutions and the same goes for tablets, but this looks a bit different. Maybe this could be a Galaxy Note II rival from the folks at HP but so far we are pretty light on details.

Pretty interesting leak to say the least. Could HP be looking to finally dive into Android full steam, and if so, would you buy an HP smartphone?