With the LG G Flex, the volume and power buttons are around back. Situated just under the camera, it makes for a disorienting experience until you get used to it. There are also those situations where you may think twice about how to do something simple, like take a screenshot. With LG’s newer devices, there are a few native ways to accomplish this, and some apps to consider as well.

Screenshot apps may sound almost redundant in today’s work of power-and-volume-down screenshots, but they’re nifty in certain situations. The aptly named Screenshot is one that does an adequate job of making screenshots a bit simpler than contorting your hands and relying on timing. It’s a simple action button on the screen, which snaps a quick screenshot when you need it. 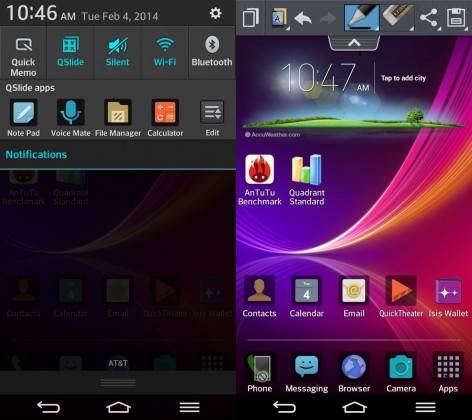 LG’s Android skin has a lot of nuance, but one of the better tweaks is Quick Memo. Avaialble right from the action launcher when you pull down the notifications shade, Quick Memo opens up a menu across the top of the screen. From there, you’ll find simple editing features. If you’ve ever wanted tot ale a screenshot and make a note on it, this is an easy, native way to accomplish that.

There are also other cool features, like the ability to draw or write a message, then switch screens. If you wanted a special header for two screenshots, you could write once and have it look the same across screenshots. You also have the option to erase or go back a step if you mess up.

The downside here is timing. To actually save a screenshot, you have to click the disk icon, which opens up a menu asking where you want to save the screenshot. If you’re in a situation where you need to capture something quickly, this isn’t the screenshot function you’ll want. Native sharing from within the app is great, but the lack of speed makes many screenshot situations nearly impossible.

The now-standard Android volume-down-and-power utility still works on the G Flex. Even though the buttons are oddly arranged around back, this still works. In a strange twist, we actually prefer the button arrangement for screenshots. There are enough times that you don’t get the timing right on a screenshot, and end up with the volume bar across the screen instead.

With the G Flex, once you get the feel of how the buttons need to hit your finger, taking screenshots the old fashioned way is easier. It can be faster, too. Rather than try to re-establish a grip on your device, you can just mash the power and volume down buttons with one finger. From there, it’s just as you remember it, just on a giant, curved screen.