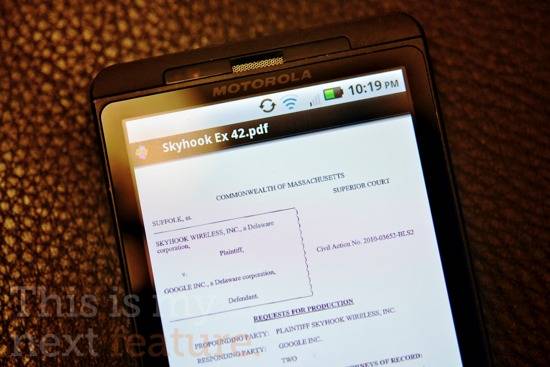 The name Skyhook might not ring any bells for some readers, but they are the ones who are suing and filed lawsuits against Google back in September over the use of Skyhook in the Droid X. The Skyhook XPS WiFi and cell tower positioning system was going to be used in the Droid X and was pulled at the last minute at Google’s request. The entire Skyhook lawsuit has been on the low as of late, but new documents reveal just how Google goes about removing things like Skyhook from mobile phones, and how they use specific Google applications and guidelines to control Android.

Without getting to deep into this a Massachusetts court recently released documents from the Google vs Skyhook filings and they seem to reveal more than just how Google managed to remove Skyhook from the Droid X, but also how they manage to control most other aspects of android phone releases and OEM’s as well. This has all been pretty much a mystery for the most part, so it is interesting stuff to say the least.

So to keep this short and sweet what it all comes down to is how Google certifies a device (in this case Motorola’s) as android compatible. After digging into the details of the documents and reading a very thorough post I will link to below, we have learned that Google uses something called the “Android Compatibility Test” and manufacturers like Motorola or Samsung have to clear every device through this before it ships. Google can tweak or change this at will, and on the go to get the result they want or to guide devices and OEM’s in the direction they would like.

How exactly do they do this? Google uses the Android Compatibility Test to either allow, or deny OEM companies like Motorola the use of what we all know as gapps. They are in fact “Google Applications” such as the Android Market, Gmail, YouTube, and Maps. Can you imagine the Droid X with all those missing, I don’t think it would sell to many units. If a device doesn’t comply with, and pass the compatibility test they will not get the Google apps we all depend on and use daily with our phones. We have always wondered how things like this past the doors of Verizon, and T-Mobile all played out, and how it was controlled. It looks like we now have more proof with all the documents released in the Skyhook filings.

When it comes down to it, Google has a tight grip on its OEM partners and they can flex that muscle when needed and restrict devices from getting the Google apps, and clearing the compatibility test. Also what all is needed to pass that test can be changed by Google, they have complete control. I say this because that looks to be what happened with the Skyhook deal, you can read more on that here. When the Droid X was going to ship with Skyhook for location services and GPS, instead of Google’s own services Google quickly went ahead and stopped the device from shipping, and Skyhook was later removed from the Droid X in favor of Google’s services. They went as far as to mention that using Skyhook would cut out Google’s ability to continue to collect data from the device and that was something they did not want as that is used to maintain and improve the location services and database. Google’s collection of location data has been a big part of Android and they don’t want go without it.

So i guess after hearing and reading some of this the main question is this: Does Google use the Android compatibility test to manipulate OEMS? Interesting question indeed. Motorola flat-out told Skyhook that Android devices are “approved essentially at Google’s discretion,” and that Moto couldn’t afford to risk its relationship with Google. Carrier agreements also require Google apps to be pre-loaded on any android phone, so Motorola launching a device without that would violate carrier terms immediately, in the end this is how Skyhook was removed from the Droid X. All of this is up to the courts to decide, we are only spectators. It is interesting to read and see the documents that were all released. To dive in yourself and to find out all the details check out the source. It would take far to long to look into this further.