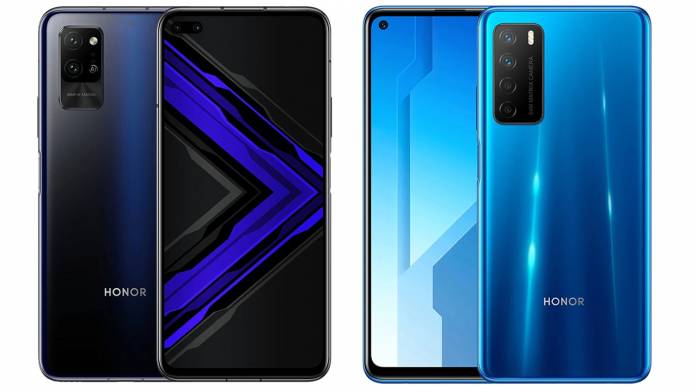 The much-awaited Honor Play 4 series has been launched and the two phones are feature-packed. Launched in China, the Honor Play 4 and Play 4 Pro are both 5G capable. Focus of the Huawei sub-brand with these devices is to fulfill the local needs of users and that’s why the series also has a variant of the Pro version that detects body temperature. This capability comes courtesy the infrared temperature sensor which can detect temperature ranging from -20 degrees Celsius to 100 degrees Celsius. Both the phones run on Android 10 OS with MagicUI 3.1 overlay.

HiSilicon Kirin 990 powered Play 4 Pro has better performance than its sibling. It comes in a single 8GB RAM and 128GB internal storage variant. Interestingly the phone has a smaller screen in comparison to Play 4, at 6.57-inch. This is a Full HD+ IPS TFT LCD having 20:9 aspect ratio. There is a dual punch-hole display housing the two front-facing cameras.

In the camera segment, the Pro version has just two rear cameras. One is a 40MP Sony IMX600 sensor (f/1.7) and the other is an 8MP telephoto shooter (f2.4) having 3x optical zoom, OIS and Laser autofocus. It also comes with AIS assisted by the powerful Kirin ISP. For selfies, there is a 32MP main shooter (f/2.0) and an 8MP ultra-wide camera (f/2.2), both having fixed focus. Honor Play 4 Pro comes with a slightly lesser 4,200 battery but has a better 40W fast charging. The Pro model comes in another variant too which has an IR temperature sensor. The Honor Play 4 Pro carries a price tag of CNY 2899 ($408) while the IR version comes for CNY 2999 ($422).