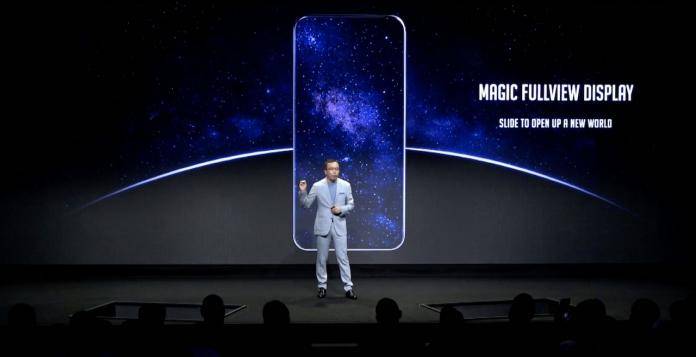 Over at IFA 2018, Huawei is showing off a slew of new products. One of which is the Honor Magic 2 that teases a different kind of camera. Well, it’s something we’ve already seen in the past but it would be interesting to witness how Huawei will implement the design. Huawei calls it the Magic Slide and it will remind you of a similar device from OPPO. This move is one of the few steps OEMs are making to lessen the thickness of the bezels.

Basically, hiding the front-facing camera and other sensors may reduce the thickness but its success will really depend on the manufacturer’s design. The Honor Magic 2 with a slide-out selfie camera has potential.

The slide-out technology is also believed to be linked with AI. Honor’s Artificial Intelligence system may also be launched once the slider is out. It could be a shortcut but that’s still unconfirmed.

Details are scarce but we know some of the Honor Magic 2’s specs include a Kirin 980 processor, 40W Magic Charge feature, battery set with 15 layers of protection, and a curved glass display that results to almost a 100% screen-to-body ratio.

We’re hoping the Android slider phone will be available in the United States. Let’s wait and see.