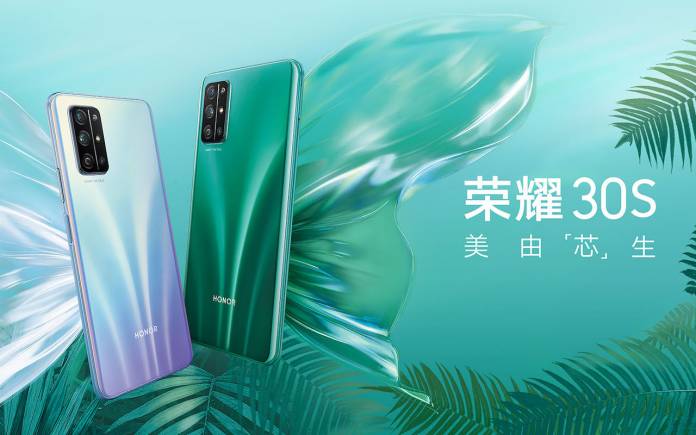 Honor, a sub-brand of Huawei, has been teasing the public its new 30s phone. The Honor 30S image renders were first shown off two weeks ago in White and Orange. Yesterday, the smartphone was once again spotted showing new colors. Before the official launch of the device, the 40W wired charging was confirmed. And today, we learn the Honor 30S went official as the company has posted the new phone on its website. This comes only a week after Huawei revealed the Huawei P40 series so you can say the top Chinese OEM has been really busy these days.

The Honor 30S is still a mid-range phone offering despite the premium design. It comes with glass and aluminum but the specs are not that premium although it already promises 5G connectivity. This 5G support is made possible by the new Kirin 820 5G processor.

Huawei’s Honor 30S comes equipped with a decent 6.5-inch IPS screen with FHD+ resolution and a punch-hole for the 16MP front-facing shooter. There is a quad-camera setup on the rear that includes a 64MP main cam, 8MP telephoto with 3x optical zoom and 20x hybrid zoom, 8MP ultrawide lens, and a 2MP depth sensor.

The capacitive fingerprint scanner is found on the right side of the Honor 30S. It’s powered by a 4000mAh battery with 40W wired fast charging technology. Apart from the Kirin 820 5G SoC, there’s also the Mali-G57 GPU, Kirin ISP 5.0 image signal processor, and 8GB of RAM. The phone runs on Magic UI 3.1.1 which is still based on Android 10.