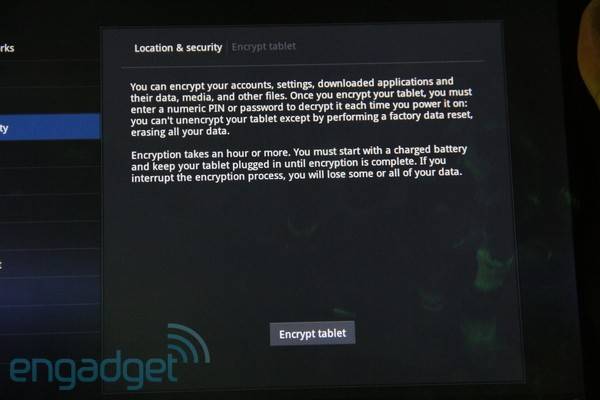 Those wacky sleuths over at Engadget took that extra tiny moment to click and extra button today and uncovered a buried-deep but extremely important feature by the name of Encrypt Tablet. This feature can be found under everyone’s favorite settings category Location and Security. With this feature you’ll be able to secure your personal data further than ever before with a password or PIN number. This feature is included on Android 3.0 Honeycomb, and not just on the Motorola XOOM tablet it was discovered on.

The Google rep speaking with Engadget mentioned that furthermore, there’s an API that allows you to enforce policy restrictions upon underlings. The strange thing about this whole situation though is the “needs a full hour’s charge” requirement. Does the encryption just… fail after that? How silly. That can’t be it.

This is the sort of thing which, now that we see it, seems like it should have been in place since the inception of Android (and every other mobile OS for that matter.)

EDIT: I’m an idiot. Takes one hour TO ENCRYPT not one hour of battery or it’s un-encrypted. Excuse my foolishness.