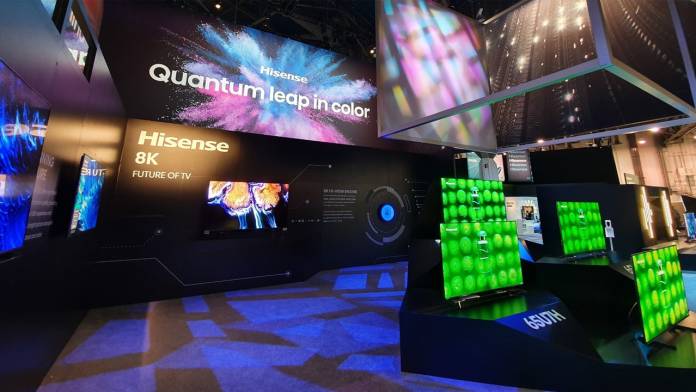 Alongside the race for quantum dot technology and mini-LED backlit screens, this year’s TV space at CES saw company’s commit to Google TV as the smart platform on their sets. Following the giants like LG, Samsung, and Sony, the affordable appliance maker Hisense unveiled its 2002 lineup featuring mini-LED televisions with Google TV. These TVs with quantum dot technology promise better HDR performance and deeper blacks. The main highlights of the revealed lineup include the Hisense U9H and U8H series mini-LED backlit TVs.

Including these and the other TVs launched at the mega showcase in Vegas, Hisense has adopted Google TV in all models irrespective of the price point. Besides the Hisense U9H and U8H, the Chinese brand has launched U6H, U7H, A-series TVs, and short-throw laser projectors.

Hisense U9H with Google TV is the flagship model featuring ULED panel and mini-LED backlight array to deliver a claimed 2,000nits of peak brightness. It has 1,280 separate dimming zones; supports HDR10+, Dolby Vision, and 120Hz variable refresh rate. A 75-inch model will arrive in late summer $3,200. The Hisense U8H picks up all the features of the elder brother but delivers 1,500nits of brightness for a change. It will begin retailing in three models – 55-,65, and 75-inch – starting at $1,099.

Hisense U7H is the next, more affordable, series in the line to be revamped in 55-, 65-, 75-, and 85-inch televisions. With 120Hz refresh rate and Google TV support, these will be available around summer this year. The U6H series is the last in ULED TV lineup for 2022, and arrives in 65-inch and 75-inch sets with 60Hz refresh rate.

Hisense is considering the transition to Google TV – the new version of Android TV interface – for its televisions, which should allow a better interactive experience and access to more apps. The A series Hisense TVs will continue to run Android TV in 2022. Considering Hisense can keep its high-end TVs affordable; the giants can be in for a good competition if the Chinese manufacture can live up to what it claims with the 2022 lineup.