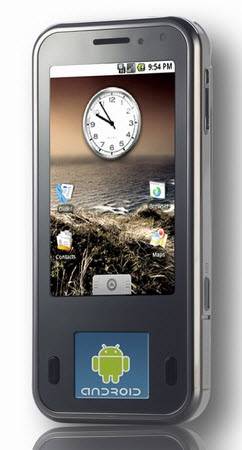 Russian Android enthusiasts will apparently get a new smartphone option from next week, as Vobis Computer pledges to launch their dual-display HIGHSCREEN PP5420.  The 900/2100MHz HSPA handset has a 3-inch WQVGA LCD touchscreen together with a secondary OLED navigation pad beneath it.

The HIGHSCREEN PP5420 itself is seemingly an Android 1.5 version of the Mobinnova Ice, which usually runs Windows Mobile.  Most of the specifications of the two devices are the same, including the 3-megapixel autofocus camera, WiFi b/g, Bluetooth 2.0+EDR and GPS.  Each also has a TV output, mini USB connector, microSD card slot and uses Qualcomm’s 528MHz MSM7201ATM chipset.

According to Vobis Computer, the HIGHSCREEN PP5420 will cost around €360 ($507), presumable unlocked and SIM-free.  No word on availability outside of Russia.