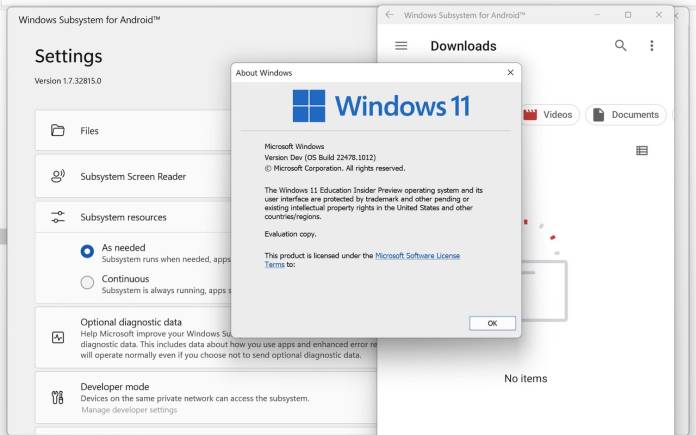 Yesterday, Windows 11 on Android Apps was made ready for Windows Insider Program. This meant more will be able to run Android apps on Windows. The system isn’t perfect yet but Microsoft and Amazon are working on improvements. And as with the Android platform, this system can be customized albeit not officially. Not all apps can run on Windows 11 but there is a quick fix because Android is open-source. This is not official so you can do the recommendations at your own risk.

Our source suggested you can sideloaded “unauthorized” Android apps. Sideloading can be done in Windows 11 via adb and the Windows Subsystem for Android and the Aurora app store. You can do this on Android 11 but not all apps may work. For example, Chrome doesn’t while Instagram loads normally as per Arif Bacchus. It can be noted that some major apps that depend on Google Play Services won’t worry.

Another tried to bypass an Amazon account and US-only restriction. It can be done by downloading the Windows Subsystem for Android files on the side as part of an app bundle. And then you update it from the Microsoft Store. Some developers were also able to play two version of Minecraft, use Android TV apps in Windows 11, and side-load an Android launcher to gain and access more system information.

You see, the system has just started and many people have already worked on “fixes” and other “methods” The possibilities are simply endless when it comes to Android. Let’s wait and see what others will introduce.