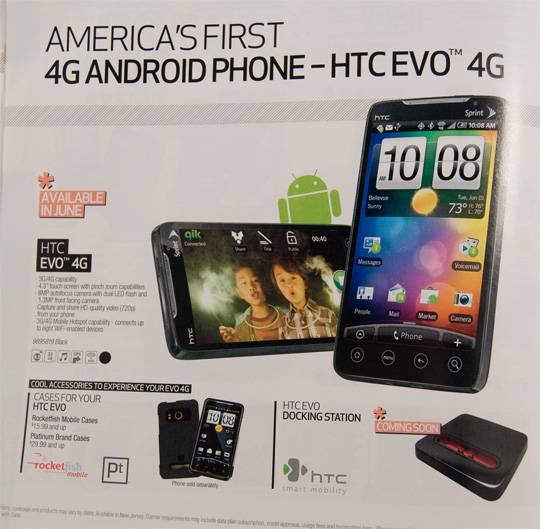 Here’s another goodies from Best Buy, there will be an HDMI dock available for the HTC EVO 4G. This dock is expected to be released by the time the EVO hits the streets. This dock will support HDMI 1.4 and should be backwards compatible. But beware, early reviews of the HDMI performance of the EVO has not been favorable. There have been some reviews in which the 108P output was only recognized as 480P.

Along with HDMI 1.4 support, this dock has a connection for the microusb port as well as the HDMI. This dock is expected to have the ability to charge, output HDMI channels and it can be used to synchronize your EVO to your computer. As mentioned early, some apps do not allow you to output them via HDMI to your television. You will not be able to watch Sprint TV and stream internet videos through this dock or the phone itself.

If you visit Best Buy’s page, this dock is listed as “coming soon”. So far there is no word on an official release date or how much it will cost. To be competitive, it will likely retail between $40 and $60, I don’t see many people spending more than that for this peripheral.