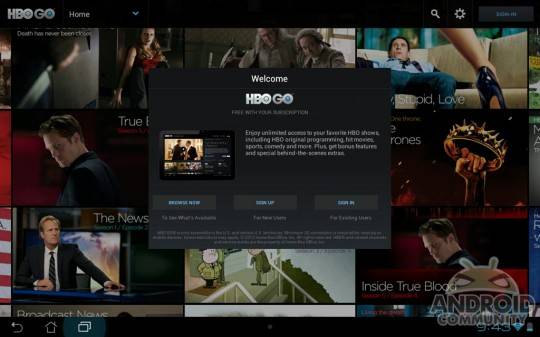 For all those diehard fans of HBO’s Game of Thrones or The Newsroom we have some good news this afternoon. Both HBO GO and the popular MAX GO have received a quickie update in the Google Play Store finally adding support for something we’ve all been waiting for. And that is HDMI-Out features. Now you’ll be able to watch your favorite show anywhere.

HBO GO for Android initially launched as a pretty terrible application, no true sharing features, no tablet support, and mirror mode was purposely disabled completely. Over the past few months the company has done a great job improving the app, as well as what it offers for their subscribers and this is a welcomed change.

Back in July they updated their app with an improved user interface that was smoother on Android, as well as full support for Android tablets. This brought our favorite shows to more than just our TV, or our small smartphone. Being able to watch The Newsroom from my smartphone or tablet, no matter where I am, is an awesome feature and something I was glad to see added.

Now HBO has finally added the last feature we were all requesting, and that is HDMI out support. Instead of purposely preventing that feature we can now use our powerful smartphones to stream HBO and MAX shows right to our HD TV’s in the living room. We’ll take all the features we can get. Now I’m just stuck waiting for season 2 of Newsroom – that show is amazing.