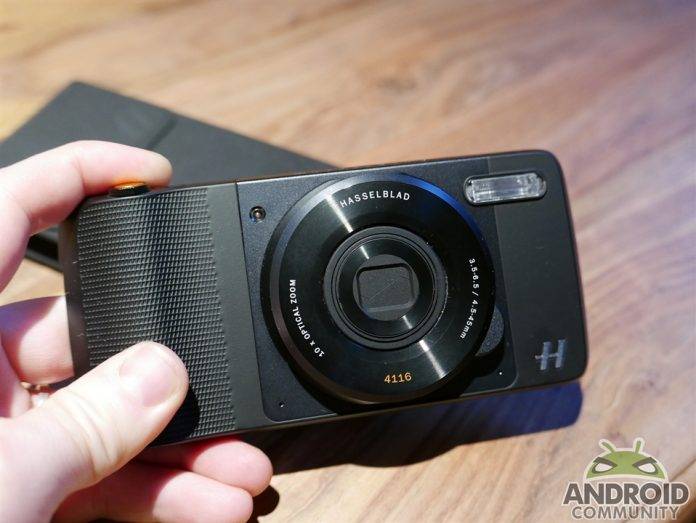 You can embiggen your phone’s camera sensor as much as you want, but there’s really only so much you can accomplish in terms of versatility before it’s time to look at modifying the glass in front of it. Nowhere is this more true than when discussing zoom quality: a genuine optical zoom always beats out the digital competition, but it’s one of the most cumbersome additions to make to any given mobile device due to the complexity and form factor involved. Until now, of course, thanks to the Hasselblad True Zoom Mod for the Moto Z and Z Play.

The Hasselblad True Zoom is not the first optical zoom device available for your mobile phone – the Galaxy S4 Zoom, DxO One, and QX from Sony have all tread similar ground – but it is by far the easiest to use thanks to the Moto Z’s Mod-friendly design. The S4 Zoom was actually a stand-alone phone/camera combo aimed at photographers, while the DxO One hangs perilously from the iPhone’s lightning connector. The QX series, for its part, required a Wi-Fi connection to your mobile, and was essentially a lens-shaped body for a traditional camera that relied on Android software to run.

The Hasselblad simply snaps onto the back of the ultra-thin Moto Z and instantly powers itself on, ready to go. Held in place by powerful magnets that won’t detach even if the phone is dropped from a fairly decent height (but which easily pry apart using minimal finger strength), the end result is a seamless pairing of two disparate devices, all in the name of giving you a better zoom. 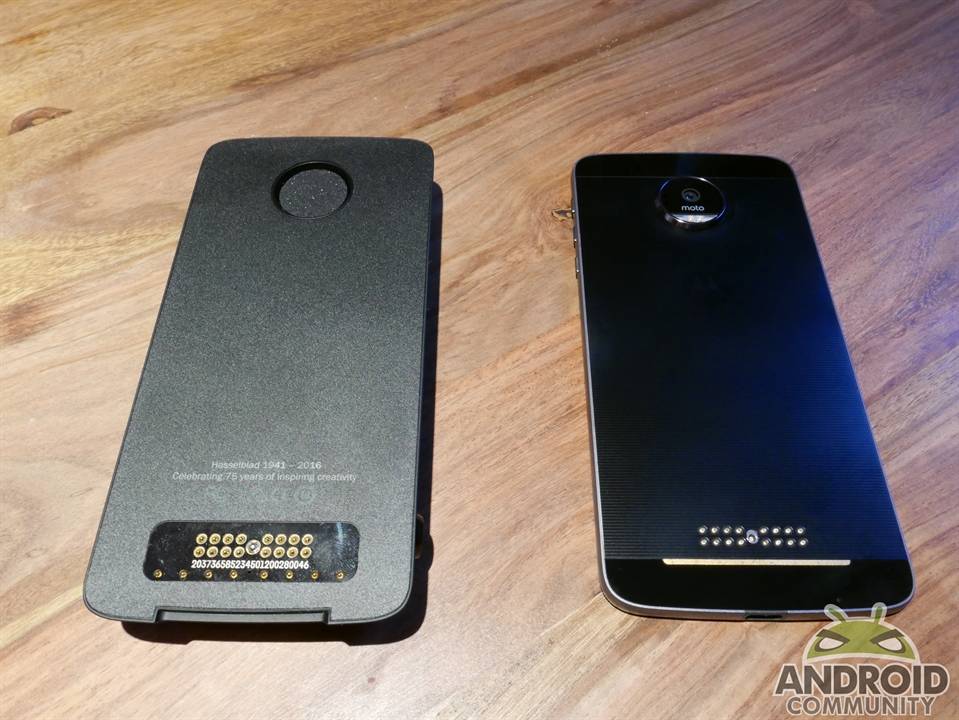 If it’s zoom your after, then run out and buy the Hasselblad right away, because the 10x optical built into the device is indeed impressive. If you’re hoping for a bit more than a mighty zoom from this $249.99 device (Amazon and Verizon pricing, $299.99 elsewhere, $349.00 CAD at TBooth, TELUS, and WirelessWave), then you might be disappointed. 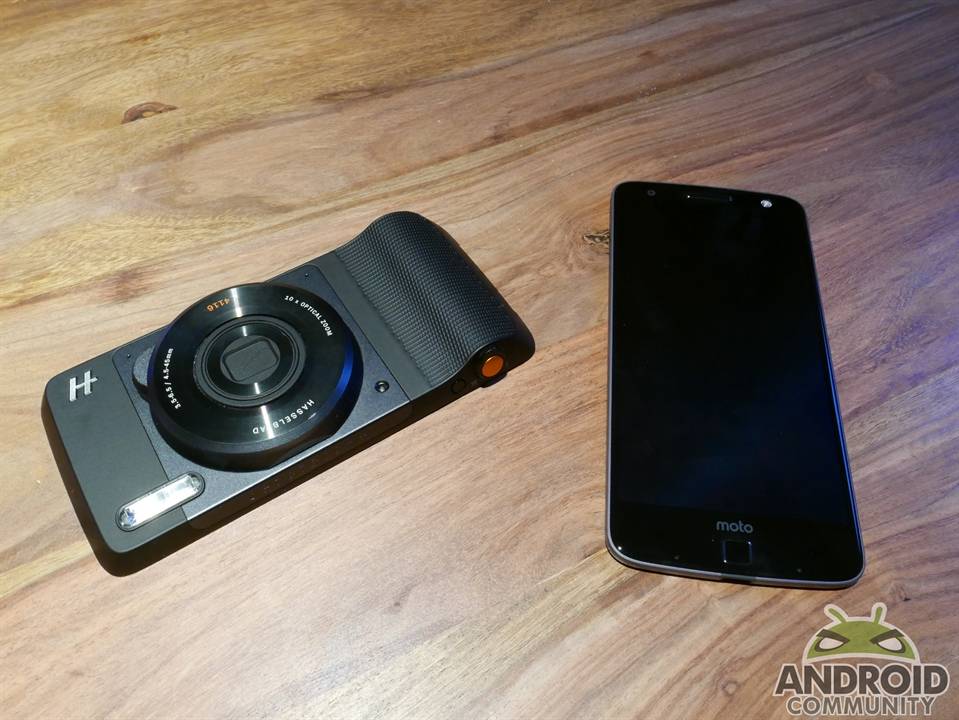 First, the details on the gear inside the Mod itself, which includes a 12 megapixel, 1/2.3 CMOS sensor with a F/3.5-6.5 aperture that will let you shoot in RAW as well as JPEG. You get 1080p, 30 FPS video, too, along with a physical zoom controller on top of the camera mod that is centered by the shutter button (and sits beside the power on/off button). That’s not far off from the 12 MP sensor on the Moto Z itself, although the phone is 4K capable, and features a f/1.8 aperture. 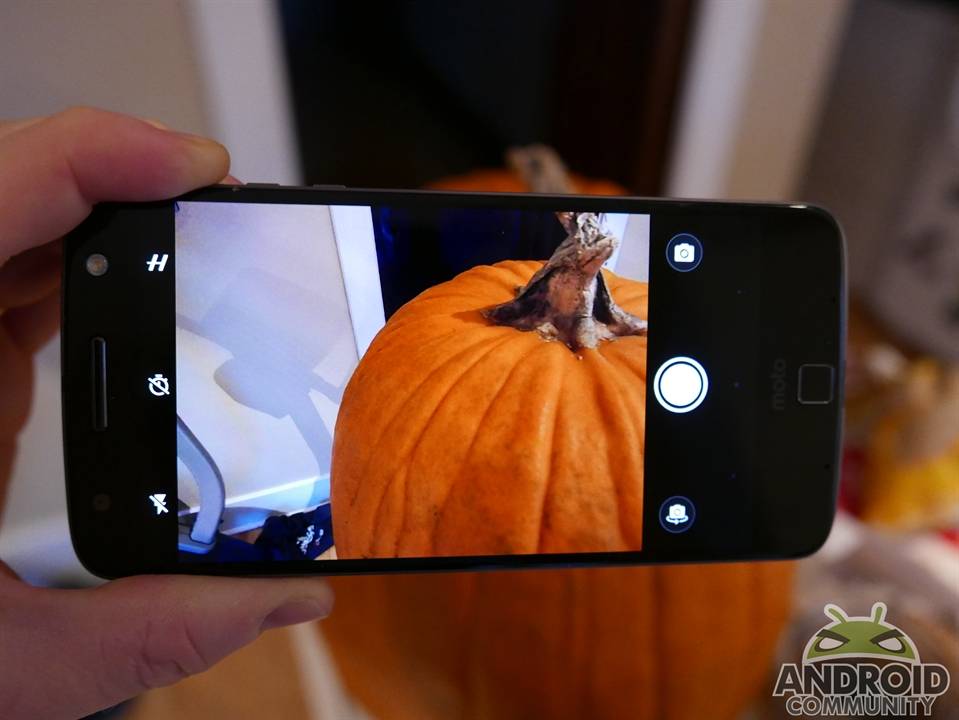 What does this mean in terms of the primary differences you’ll discover when examining pics from the phone versus the Hasselblad Mod? You’ll notice better low light performance from the Moto Z, and image stabilization isn’t quite as good as it is when using the bare phone itself. I also had the same trouble shooting under harsh indoor lighting with the Hasselblad that I would have had with a phone, so there was no dramatic improvement there, either. Of course, if you’re far away from your subject, and can’t physically get any closer, the 25-250mm zoom will save the day every single time, as it’s light-years better than the digital image crop you’d get on any phone.

Moving beyond what the Mod does for your photos, it’s also important to understand how it will impact the shooting process. The Hasselblad True Zoom has to open the lens each time it’s activated, and it will automatically close if you go back to the selfie cam. This means it’s slower to get going than a standard phone camera, coupled with a shutter button that is also not as quick as simply tapping the screen. Then there’s the software: it resets to the default each and every time you use the mod, which can be frustrating if you’re used to tweaking individual settings in Professional mode. I also found the zoom button extremely touchy, which forced me to gingerly tap in and out when framing a shot so as not to zoom right past what I was trying to capture.

The biggest issue for me, however, was the additional, and unevenly-distributed weight that the Hasselblad True Zoom adds to the back of your phone. Handling the device with one hand is awkward at best once the mod is attached, and this lead to me dropping it numerous times – and scratching my phone’s screen in the process. I understand why it has to be this way, but it’s something I noticed each and every time I used the camera.

Still, that zoom is pretty special. I used the Moto mod to cover the entire 2016 L.A. Auto Show, indoors and outdoors, and came away pleased with the majority of my shots. It was great to be able to zoom in from the rear row of a press conference and still snag a usable shot for social media that I could immediately upload without having to pop the memory card out of my traditional digital camera. If you’re facing specific situations where you’re craving extra zoom but don’t want to lug around a camera body, then the Hasselblad makes a lot of sense – and it’s priced low enough for you to give it a try without too much fear of buyer’s remorse.