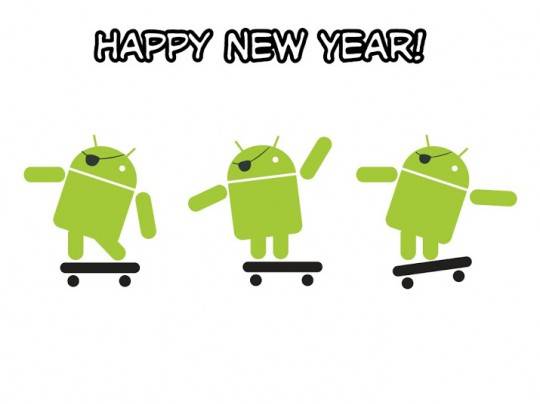 Happy New Year! While the Android Community team will be enjoying some down time today, we did want to mention a few things. Aside from wishing everyone a happy and healthy 2014, we have to say thank you for 2013. After all, without you we would not be able to do what we do. We have a few posts planned for today that take a look back at the year, but quite honestly, we are pretty excited about the year ahead.

Similar to 2013, this new year will bring plenty of new smartphones and tablets as well as apps. We also expect to see more in terms or wearables and connected devices in general. It seems safe to say we will see a new version of Android later in the year, not to mention some new Nexus branded devices. We hope the rumors will stay away for a bit, but we do have Google I/O approaching and as always, that tends to bring plenty of excitement for the Android geeks.

In addition to Google and Nexus news, we cannot overlook the other major players. We are expecting to see more from Samsung, LG, Asus, Archos, Motorola, and the countless others that have Android devices. We are also hoping to see some new players as we move into 2014.

More important right now — CES. To that point, CES 2014 is almost upon up. The Android Community team will be onsite in Las Vegas to bring the latest news and hands-on coverage. We will be flying out this weekend and coverage will be kicking off soon after we land.

Take some time today to recover from any celebrating you may have done last night and make sure to keep an eye on the feed because there are a few posts slotted in for later today. Otherwise, if anyone has any predictions they would like to share — make sure you hit up the comments below. And don’t forget to bookmark our CES 2014 portal because the coverage will be starting sooner rather than later.