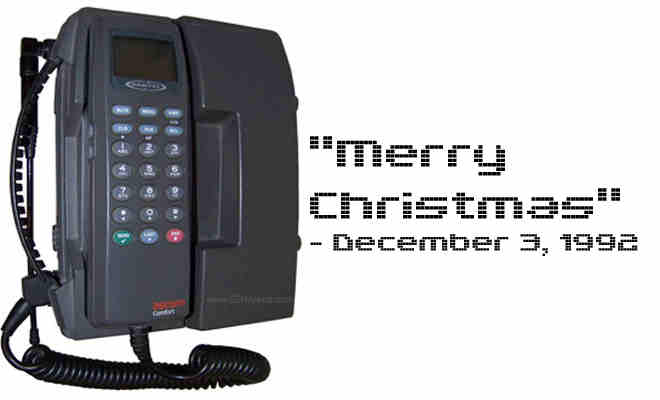 For those who grew up in an “era” when people communicated through messaging apps like Messenger, Viber, WhatsApp, etc, December 3, 1992 is probably not a significant date. But for those who are used to sending text messages or SMS, then it is a day to commemorate. The very first Short Message Service or SMS or text message was sent this day 25 years ago. British Engineer Neil Papworth is the one credited with sending the first SMS out, although technically it was from a computer to a mobile phone.

The message Papworth sent out to Richard Jarvis, who was then director of Vodaphone, was made up of two timely words: Merry Christmas. However, there was no “Merry Christmas to you too” or even just a “thank you” back, as the technology only allowed for phones to receive text messages, and not to actually respond to it yet. But it is a milestone, even though it’s not as popular as it was back during its heyday in the 2000s.

In the UK alone, where the first SMS was sent, people were sending as many as 151 billion SMS per year back in 2012 and 66 billion back in 2007 when it started kicking in. Currently, there are 96 billion text messages every day in the UK, according to Sky but the past few years have shown a steady decline in this number. The popularity of messaging apps has decreased people’s desire to text since you can talk longer to people while connected to a WiFi or your data.

And yet, some still believe in the power of in person communication. Social media expert Toby Beresford says that you lose a lot when just texting or messaging, but talking to someone in person can be logistically difficult sometimes. In any case, thank you text messaging for making our lives a bit easier.