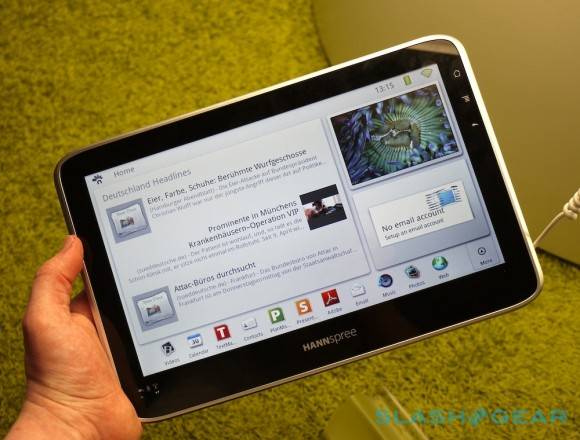 Chris Davies over at Slashgear was able to get a hands on with the Hannspree SN10T1 Tablet and the first impression is, you get what you pay for. Because it’s screen resolution falls short of the 1200×800 display, it can’t incorporate Android 3.0 (Honeycomb), Hanspree was forced to settle for Android 2.2 (Froyo). In addition, it comes without the Android Marketplace installed because Hanspree didn’t provide all the phone functionality that’s required for the official Android Marketplace. So instead, it has a third party app store called Android PITs App Center. Still, there’s a lot under the hood to consider.

It’s design is thick and robust, but it’s also mostly plastic with no metal case, meaning it could be easily cracked, if dropped. It’s WiFi only, has Flash player support, Bluetooth, HDMI, microSD cards, and a “split layout” virtual keyboard. Sadly, no cameras, so no video chat. And while it doesn’t come with Honeycomb, Hanspree has placed a custom UI known as TapTap that overlays Froyo and provides a usable interface. Hanspree has it earmarked for US release in Q3 of 2011, and should be able to take advantage of a budget minded tablet niche.