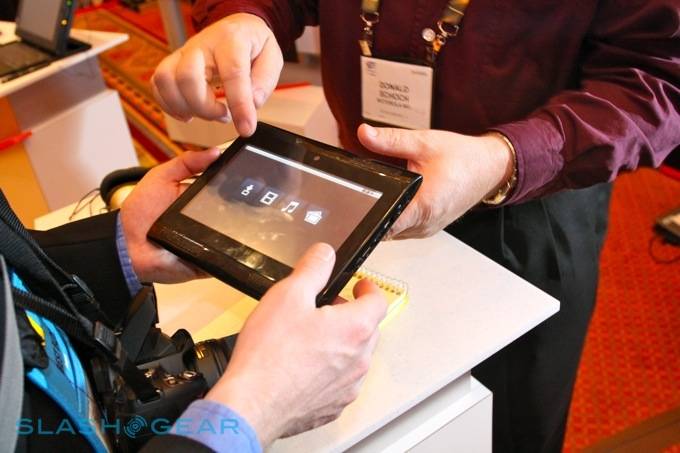 If you like tablets with Google’s free mobile OS, here’s more on one of those, the ICD Ultra that will be arriving to Verizon, most likely, by the end of the year. SlashGear had a hands-on with the 7-inch LTE Ultra, to give us a better perspective on this upcoming Android device.

The ICD Ultra Android slate uses NVIDIA’s Tegra 2 chipset and a Motorola LTE radio to bring you the web faster then ever. It is capable of outputting 1080p Full HD video via a mini HDMI port. According to Vincent, Verizon’s demo had crisp and smooth video playing Avatar on a HDTV. Playback on the Ultra’s 7-inch screen was also very good.

The resistive touchscreen works good, although it lacks some finesse in comparison to other capacitive displays. The regular Android onscreen QWERTY keyboard on this device proved to work well too. Android 2.0 on the ICD Ultra is fully functional, unlike the build on the more family-friendly Vega. Verizon had a test LTE network up and running so, as you’d expect, streaming performance was impressive.

Expect to see this tablet until Verizon gets their LTE network up and running by the end of 2010. No word on price or date of arrival just yet, but they said that it would “be brought to market by Motorola”, so maybe it will carry the Motorola brand name instead of ICD’s. Enjoy the video below, and if you like to see more pictures, check SlahsGear.com here.