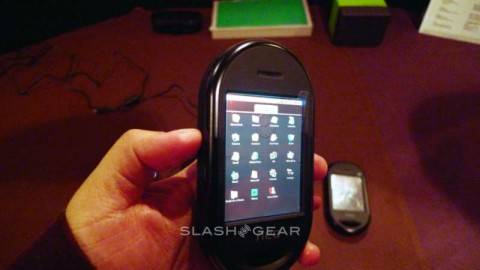 We had a chance to stop by the OpenMoko booth at CES this year to get a quick look at the progress they have made with the Neo FreeRunner.  Unfortunately this device did not get and changes as far as hardware specifications. They have however made plenty of software improvements so the phone itself is more responsive to commands compared to previously handled models.

Of course the Neo FreeRunner was shown running Android. The reason they are showing the phone running a competing operating system is because OpenMoko supports the open source movements by welcoming any development involving their handset.  It comes as no surprise that Android runs quite well on this handset.

While this phone is not designed for mainstream users, OpenMoko confirms that is was indeed designed for developers and hackers. Most mainstream users will be upset to find that despite having usable basic features, the Neo FreeRunner does lack many common features found on today’s pones such as a camera. Many developers have requested that hardware features be added, but OpenMoko has not given us any information as to if these requests will be filled.