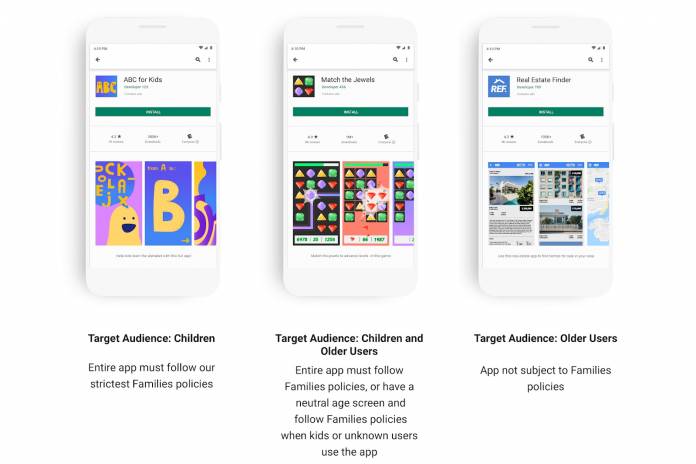 Parents these days are constantly worrying about what their kids access on devices and at the same time, they don’t want to seem like they’re digitally smothering them by constantly looking at what they’re doing. Google wants to help and over the years they’ve guided parents in accessing family-friendly content and also setting digital ground rules fro their children. Now they are rolling out new policies for developers to ensure that they will be able to create a more kid-friendly Google Play Store.

All developers will now have to complete the new target audience and content section of the Google Play Console to ensure that the app they’re publishing isn’t really targeting children. But if part of their audience are minors, then they should be able to comply with all existing policy requirements for apps like those. If your target audience doesn’t include children, then the new section should be easy to complete.

However if developers realize that while their primary audience is adults but kids are also part of the demographic, then Google will have some follow up questions on that section. Google will then use the information provided, together with a review of your app marketing assets, to categorize your app and also apply the proper policies for target audience groups namely children, children and older users, and older users.

Somehow in connection with this, Google has changed its policy on app selling or facilitating the sale of marijuana according to Android Police. Initially they banned almost all apps that were promoting marijuana use despite the fact that it’s legal in most states. The reasoning behind is that it’s still not legal for minors to have access to it. They clarified though that only the apps selling weed online will be removed so apps like Eaze and Weedmaps simply need to remove the shopping cart flow in order to be restored.

As for the more kid-friendly target audience and content section, all new apps must answer that section before they get published or rejected. As for existing apps, you must be able to comply by September 1, 2019.