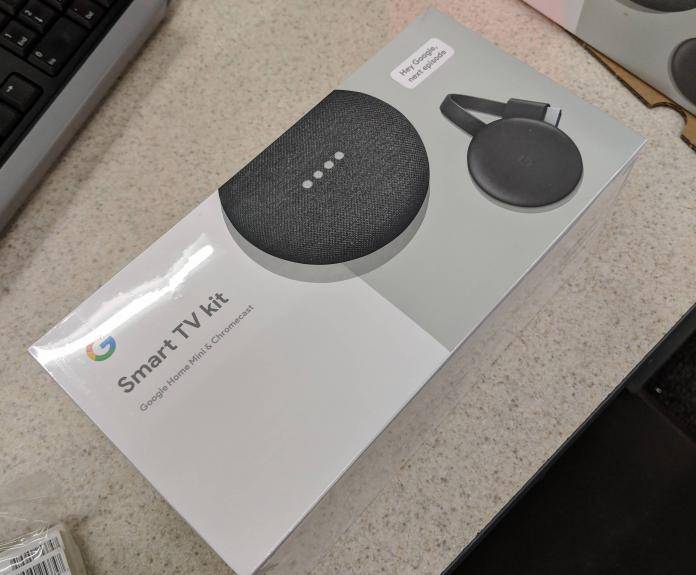 As October 9 is fast approaching, we’ll probably see more and more rumors and leaks about upcoming Google products. But this time around, what we’ll see are most likely the real deals. A retail employee from Walmart has apparently posted a new product that is coming out of their stores and part of the package is the rumored new Chromecast. The image seemingly confirms the previous things we’ve been hearing about the device. Even more interesting is that the package actually has a name: Smart TV Kit.

Apparently, this new kit from Google includes the Google Home Mini and the next generation Chromecast device. This is actually pretty interesting given that the tech giant has been making a push for a more visual smart device, which may or may not include the Google Home Hub (we’re betting on may include). This means that even if you don’t have a smart display, you’ll still be able to get visual information if you connect your Mini to a smart TV through the Chromecast.

Otherwise, it’s almost the same as the previous Chromecast device, except for the supposed addition of Bluetooth connection and also the promise of improved and faster Wi-Fi. Some are supposing that the reason why this may have Bluetooth is that a physical remote may be included, but based on the leaked image, there doesn’t seem to be any in this kit.

We don’t have any news yet as to how much this Smart TV Kit will cost those who are interested, but we just have to wait for a few more days to find out the official details. The October 9 Google event is expected to unveil the Pixel 3 and Pixel 3 XL, Google Home Hub, and maybe other devices or accessories.