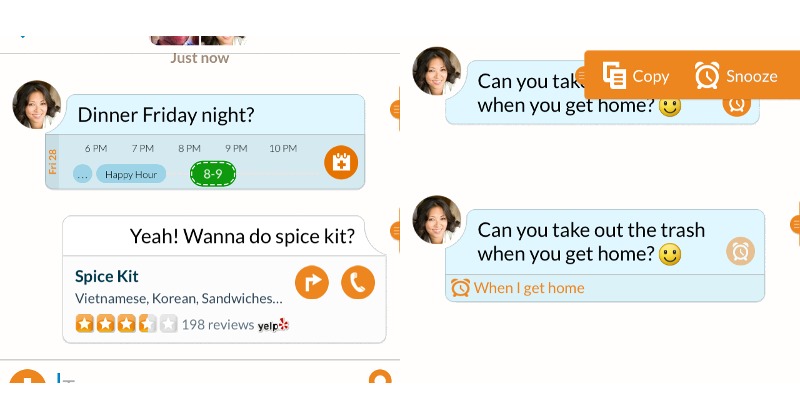 Wouldn’t it be swell if you could easily turn chat messages into calendar appointments or todo items right then and there, without having to leave the chat app or switch back and forth between chat, email, calendar, and whatnot? That bit of smartness might soon be a reality on Hangouts if Google‘s acquisition of startup and chat app Emu is what we think and hope it means.

You might not have heard about Emu, which is perfectly fine since it’s an app available only on iOS. The purpose of the app is both ingenious and simple that you wonder why not more messaging apps have this feature. It analyzes chats for important keywords and turns them into the appropriate action for another app. Your crush asks if you’re free for a dinner date Friday night? No need to scamper to your calendar just to check. Emu will display a small overlay that shows you if you have something already on your plate. Mom asked you to buy milk on your way home? A simple swipe and tap puts it on your tasks. To see it in action, here’s Emu’s video ad, which hopefully isn’t condoning playing games while driving.

If you really think about it, you’d probably wonder why Google Hangouts doesn’t have that feature already. After all, Google is king when it comes to context analysis like that. In fact, Gmail on the web already has that feature, turning text into links that can be turned into a calendar appointment. Not so on Android though. Granted, Emu does a lot more than simple linking so it will be quite interesting to see where this new venture will be heading.

Excited as we may be here in Google’s world, it’s not good news for existing Emu users. Unlike most Google acquisitions, Emu will be abruptly ending its product’s life on iTunes App Store, effective August 25. Details of how Emu operation and development will continue are not a matter of public record, but we do expect, if not hope, that this assimilation will bring Emu’s smart features into apps and services like Hangouts, Google Now, and maybe even Gmail on Android.