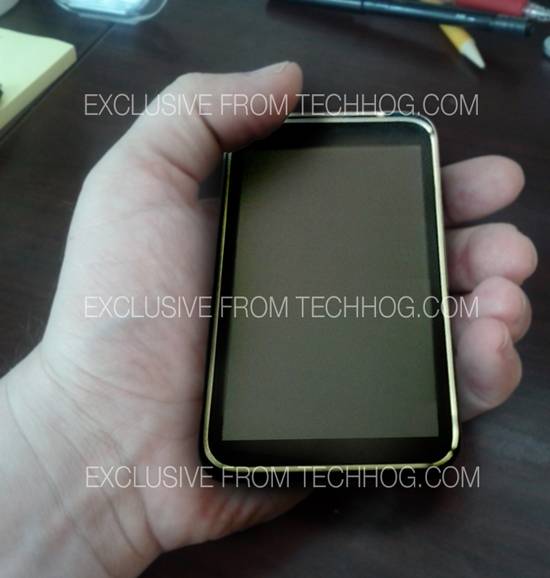 Some leaks suck. Your water bill goes up, its a mess, carpet can get ruined. Some leaks are freaking awesome. They reveal new phones, bring us pics of said phones and make me geek out for hours on end! This is the second kind. This, ladies and gentlemen, is the Nexus 3.

This leak, courtesy of a brave soul in the Android Dev Labs, brings us an early look at a prototype of the HTC manufactured 3rd Nexus phone which we expect to launch with Ice Cream Sandwich late this year. Let’s see what we’ve got. First, as you can see above, there is a distinct lack of the usual hardware buttons. Ice Cream Sandwich is supposed to bring Honeycomb UI elements to phones, and it appears this includes the trading of hardware buttons for the action bar. While it is hidden by the thumb, there is also a front facing camera.

While this is obviously not a finished product, especially considering Ice Cream Sandwich is a ways off still, there are still a few more jewels to gleam here. First it was also noted that Google is testing both an HSPA+ and Sprint CDMA version of the phone, indicating we may see the phone’s initial launch be to multiple carriers. Also, since Google’s changed its mind over hero phones before, a la the Xperia Play, we only know that HTC is being considered.

As we draw closer to the end of the year, expect more details and a more solid idea of who will be building the next Nexus. Now if you’ll excuse me, I have a phone to go drool over.