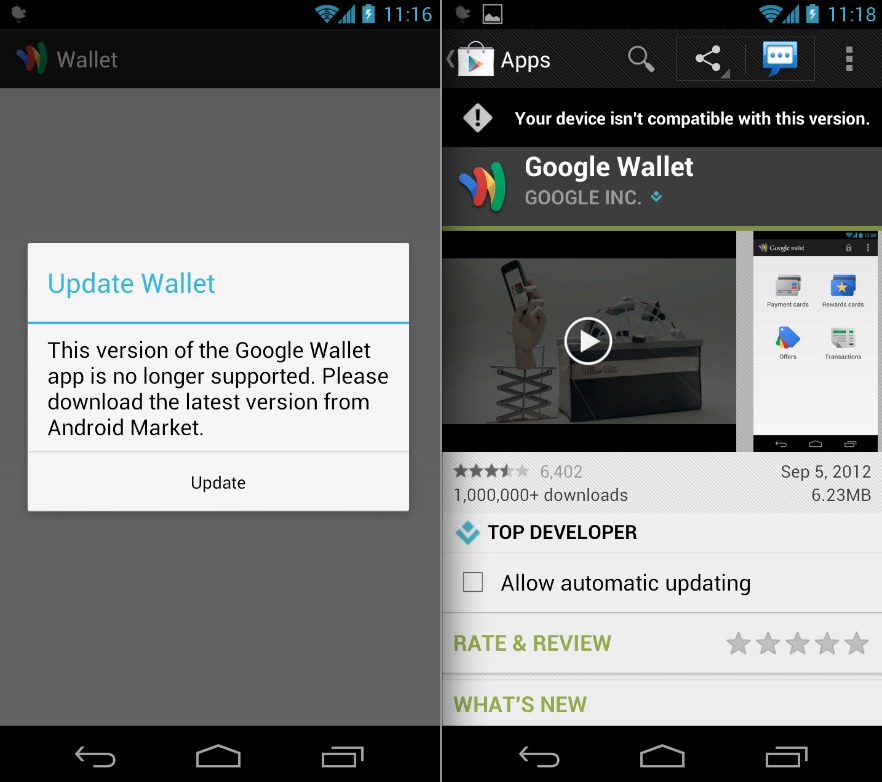 So Google Wallet has never officially been available for Verizon, on any smartphone. However for months now users have been able to side-load Google’s awesome Wallet app for mobile NFC payments using the web store, or installing a custom ROM. Today however it appears that Google’s pulled the backend plug.

I actually used Google Wallet on my Verizon 4G LTE Galaxy Nexus just last night without issue. This morning though, we are now greeted with the image you see above. Launching Wallet you’ll be greeted with the sad news that the app isn’t supported with this current version, then directs you to the Play Store where nothing is available. Maybe an update is coming with Verizon support? Yea, we highly doubt that.

Apparently the current “version” is no longer supported, but that is the only version available. Sadly it looks like either Verizon, Google, or both have managed to find away to kill off this awesome feature for everyone. Just yesterday Google announced their Wallet service has doubled in usage (in just one month) since allowing all major credit cards access. With them removing devices access like they’ve just done here we don’t see those numbers continuing to climb.

Most likely the awesome developer community will quickly and easily find another way around this situation, but for now we’ll be stuck without Google Wallet — or just install an older APK. For those that have been unofficially enjoying Google Wallet, let us know if you are seeing the same prompt.

Update: It appears that many users (us included) have successfully restored to an older version and things are working again. Google Wallet version 1.5-R79-V5 works fine here — while v6 gave the error shown above. Give it a try folks!

— Thanks to all who sent this in!