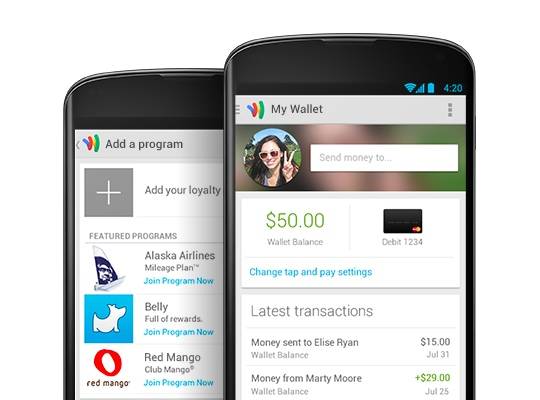 A new Google Wallet app has been announced this morning and it said to be coming to “all” Android phones. Well, all Android handsets that are located in the US and running Android 2.3 or later. Anyway, this updated Wallet app will see a focus on rewards cards, offers and being able to send money to others. Google Wallet will also still be able to make payments at retail locations, however this functionality will still be limited to approved devices.

Shifting over to the rewards card support and this looks like it means users will be able to leave those plastic keychain tags at home. Using the Wallet app you will be able to load up these cards and use them in-store by having them scanned. Google is setting this up so you will also be able to sign up for some new programs directly from within the app. There are several merchants available using this now with more support promised for the future. Google will also be able to send a notification when you happen to be nearby a saved loyalty program.

Next up is offers. Offers that are found within Google Maps, Google Search, Google+ or Google Offers will be able to be saved in Wallet and presented during checkout. And in addition to the offers many are already familiar with, Google will also be adding new options in the future. Here they have said other offers such as Valpak will be coming later this week.

The Google Wallet app will also serve as a one-stop location to monitor all your purchases. And finally, given the access to your accounts, it looks like Google is taking security seriously. In the case of Wallet they have said all transactions are monitored 24/7 for fraud. As well, there is Google Wallet Purchase Protection and the ability to remotely disable the Google Wallet app online just in case your phone is lost or stolen.