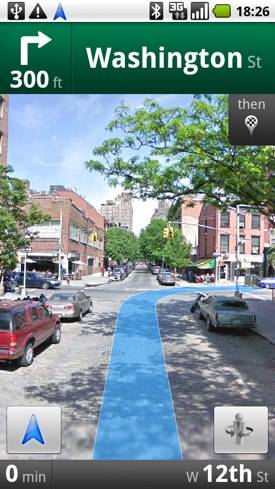 Two Android apps intended for assisting blind or partially-sighted users are getting some attention of late, with Google’s WalkyTalky and Intersection Explorer both being praised for their useful functionality.  WalkyTalky basically hooks into Google Maps navigation engine, but gives directions in spoken rather than just on-screen instructions.  It also reads out the street names you should be passing, so as to help users keep track of where they’re walking.

Intersection Explorer, meanwhile, allows users to preview their journey in a Street View style UI, complete with audio prompts as to which roads are being passed.  While that might not sound like much, it allows partially-sighted users to rehearse routes and thus feel more comfortable on their journey.

Both apps are free downloads.  We quite like the idea of using WalkyTalky with headphones for more comprehensive audio-only navigation; there are plenty of times when whipping out your expensive Android smartphone doesn’t seem like a great idea.