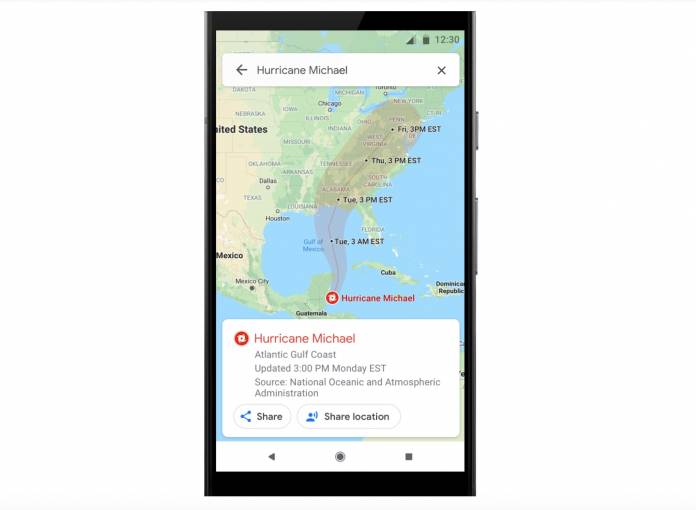 The information that is immediately available to us during times of natural disasters can sometimes be life-and-death situations. Google previously introduced SOS alerts that would show up in search results but some people have found it to not be as useful as expected. Now the two-year-old feature is getting a much-needed overhaul to give more real-time and more visual information on both Google Maps and Google Search for things like earthquakes, hurricanes tornados, and floods.

One of the new things that you’ll see is detailed visualizations of these natural disasters so you’ll get a better understanding of what may happen, especially if you’re in the area that will be affected. You will see a crisis notification card on your Google Maps if your location says that you’re near the impacted area in the days leading up to a hurricane. After an earthquake, you’ll see a shakemap with the epicenter and magnitude and color-coded intensity. Flood forecasts will also be shown on the cards if you’re in India.

Later on, Google Maps will also be able to give you a prominent alert on your app if the route that you’re planning to take will be affected by any crisis activity ongoing in that area. When possible, they will give you a different route so you won’t be affected. Crisis navigation will arrive later this summer, probably in limited areas initially.

You can also share your live location on Google Maps to your loved ones, in case you get caught in critical situations. From the crisis card itself, you can share for as little as 15 minutes or when you want to stop sharing. You can also share the crisis information right from the card itself where your loved ones will be able to see all the relevant information including visualizations, emergency contact information and other important things to know.

Google will start rolling out hurricane forecast cones and earthquake shakemaps in the next few weeks while flood forecasts in India will start with Patna and then expand to other regions.