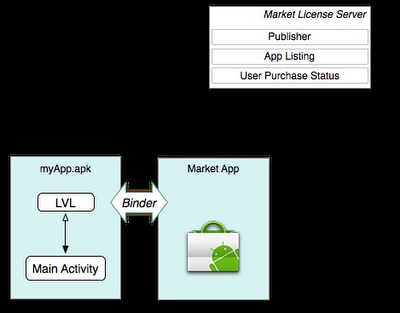 Sometimes, you just don’t want to pay for an application. Even if it’s not the most expensive app out there, sometimes you just don’t want to drop the cash to get your hands on it. That doesn’t mean you don’t want the app — just that you don’t want to pay for it. So, if you can type a search into Google and find the APK file for that particular paid Android application, it won’t take much time at all to get it onto your device, minus the price tag. (That doesn’t count AT&T Android-based handsets, mind you.) But, it looks like that’s about to change, thanks to Google.

Google has just announced that they are going to allow developers to use a brand new licensing software for their paid applications, made available through the Android Market. Basically, this means that getting a pirated copy of any paid application that takes advantage of this software is going to be increasingly difficult. If at all possible.

It works, because the application will call upon a Google server to check the application against purchase records, versus the credentials of that purchase. So, if it isn’t you that bought the app, it will reportedly just not function as it should, if at all, on your device. While there’s the current copy-protection made through the Android Market, it’s obviously not doing the job well enough. Now, we just hope that it checks all of the purchase history against the particular Google account, and not just the device. Lest we lose all our paid apps when we get a new phone. What do you think of this move from Google? Are the open doors closing a bit?