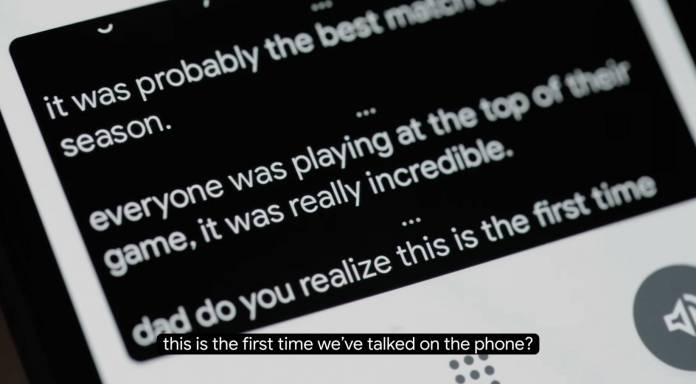 Sometimes, the features that OEMs highlight on their new devices can be better understood if you see it in action. That’s probably the idea behind Google’s new video series called “True Pixel Stories” which highlight two of the interesting features that the newer Pixel phones have: Live Caption and Car Crash Detection. Having actual stories of how they used the features in real life has a sort of different effect than coming up with the usual colorful and fast cut videos with pop tech beats.

They have released two videos so far. One is about a father who was born deaf but is now able to enjoy a phone call with his son through the Live Caption feature while the other is about a man who experienced the usefulness of the Car Crash Detection when his family got into a vehicular accident. We can probably expect more videos to come out in this series and probably we can expect camera features to be highlighted next.

In the first video called “First Call With My Son”, the Live Caption feature has made it possible for Matthew who was born deaf to go on actual phone call with his hearing son Harry using his Google Pixel. The feature generates subtitles on any audio that is playing on your Pixel device which includes phone calls. Even better, it actually works offline and even if you don’t have an internet connection so it gives you a low-latency experience. It’s actually a pretty touching video as it is able to show how technology can make something like this possible.

‘The Crash That Called” video shows Chris’s True Pixel story involving the Car Crash Detection feature. When they got into an accident at a difficult intersection, the Pixel detected they were in an accident and because of that, they were able to call for help easily. The feature makes the phone vibrate and ring and users can say “Emergency” or tap the on-screen button and it will facilitate an emergency call for you and share your current location.

Both videos end with an invitation to share your stories by emailing TruePixelStories@gmail.com. Who knows, the next video might be about how your Pixel device changed your life.