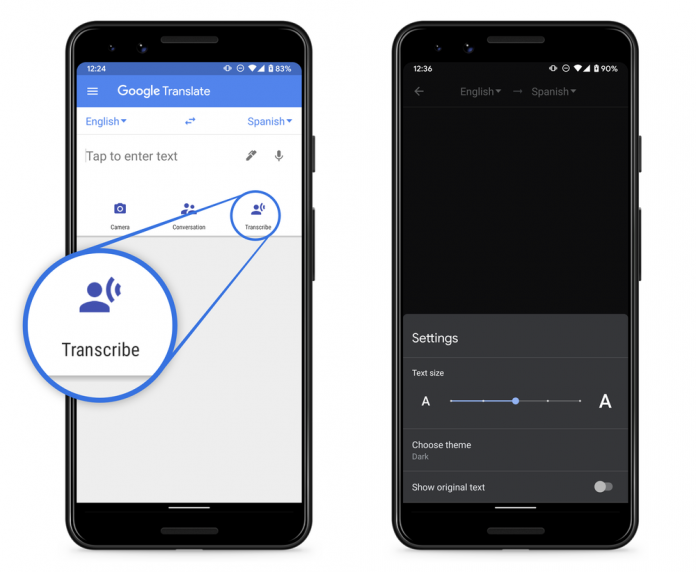 One of the great new things that we received from Google Translate was the ability to transcribe and translate audio from external sources to your Android app. It let you listen, follow, and understand in “near real-time” conversations, speeches, and let you communicate with someone who doesn’t speak your language (or if you don’t speak their language). One thing missing though was the ability to save the transcription within the app. Finally, we’re getting that feature as well.

The ability to have external audio transcribed and even translated on device is pretty neat especially if you’re traveling to a place where you don’t speak the language well. But previously, if you wanted to save the transcription, you had to copy it and paste it on your notes or wherever you save text. It would of course be more convenient if you could just save and access it from within the Google Translate app itself.

Google announced that you can now save the transcripts of your transcribe session within the app. All you have to do is tap on the star in the session and you’ll see all of the transcripts you’ve saved on the sidebar menu of the translate app. You can name and rename the sessions so you can organize them better. This is a great feature to have for those taking audio notes on lectures and webinars.

Update: You can now save your transcript of a transcribe session in the Google Translate app on @Android. Plus, translation is now available in Italian. 🇮🇹 https://t.co/HKY2ZvVpN6 pic.twitter.com/kXFUB5PHex

Another new thing to the transcribe feature is the addition of Italian. This brings to nine the number of languages supported as it previously was able to transcribe and translate English, French, German, Hindi, Portuguese, Russian, Spanish, and Thai. Real-time translation and transcription are much more difficult processes but we can probably expect to have more languages added eventually.

You can update your Google Translate app to the latest version although this seems to be a server-side update. Some devices running version 6.1 are still not seeing the star option but at least you’re running the latest version which is almost always a good thing.