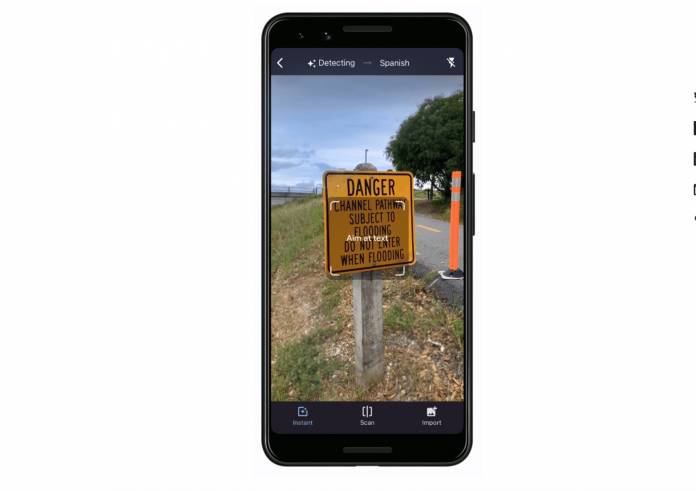 Having an app on your phone with real-time translation powers is pretty useful especially if you travel a lot and you’re not that familiar with the language there. When Google Translate introduced the instant camera translation feature, it helped users “intuitively understand” their surroundings even in a foreign country just by pointing a camera at a sign or a menu or document. Google is now bringing even more improvements to the app and feature, adding new languages, automatically detecting the original language, and using Neural Machine Translation for better results.

The instant camera translation is pretty helpful as you don’t need to type it out on Google Translate. Just point your phone’s camera at a sign or a menu at a restaurant and it will automatically translate what you see and even overlay it on the text. Originally it was only able to translate 88 languages but now they’re adding 60 more to the fold including Arabic, Hindi, Malay, Thai, and Vietnamese. Also, you can now translate between all the other languages supported and not just English to another language.

If you’re going to a place where there are two languages spoken, it can sometimes be hard to determine which one is on the text you’re looking at. Now the instant camera translation will automatically detect what language it is in by tapping on “detect language” in the language source and then it will translate it to the language that you chose. This will be handy for places like South America where they speak both Spanish and Portugese.

Neural Machine Translation is now used for the instant camera translations of Google Translate. Google says it will reduce errors by 55-85%, bringing you more accurate and natural translations. If you don’t have an internet connection where you’re going, you can also download the language onto your device so you can still use it when offline.

The Google Translate app will also have a new look and should be faster to translate. The flickering of the translated text has also been fixed. You should see all three camera translation features at the bottom: Instant for translating foreign text when you point your camera; Scan when you take a photo to highlight text you need to translate; and Import to translate photos from your camera roll.