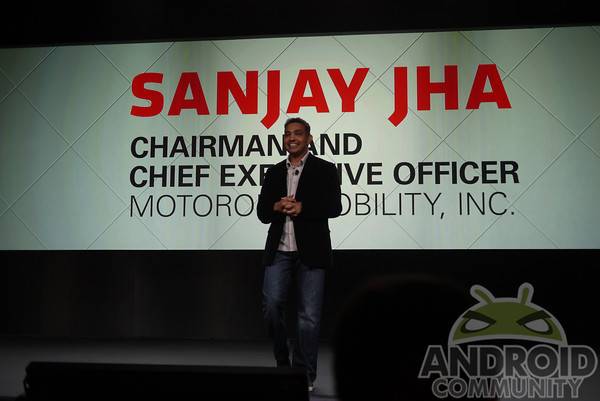 News reports are just hitting the wires that Google will be replacing the CEO of Motorola Mobility once the merger is completed. Big news as many wonder how and if things will change once Google takes charge of one of the biggest hardware manufacturers and patent holders in the mobile market. According to Bloomberg they’ll be replacing the CEO with one of their own. Who is ready for that fully opened and unlocked Motorola DROID Nexus coming this September with Android 5.0 Jelly Bean?

Most likely we wont see a Motorola DROID Nexus with Android Jelly Bean, but I’d like to dream in the meantime. Now for the details. According to Bloomberg once the merger is complete Google will be replacing Motorola Mobility CEO, Sanjay Jha with one of their own big timers. We are hearing Dennis Woodside is in line for the job. Woodside has been the the lead Manager for US Ad Sales for some time and left that position to oversea the Motorola merger.

In case you are confused, Google bought Motorola Mobility to the tune of $12.5 billion and have received approval from U.S. and European Unions on the merger. They still need the thumbs up from China for this deal to be officially complete but with the news today it appears they feel pretty good that everything is a go.

Motorola has been hugely popular and successful with their DROID line and we expect things to continue strong, especially if one of Google’s own are in charge. The original DROID was popular but with locked bootloaders and odd choices lately I’m excited to see what the future holds for Motorola. I’ve always loved their hardware but locked bootloaders and their Blur UI has kept me away for well over a year. As soon as we hear anything confirming the new CEO, or when China approves the deal we’ll be sure to update with additional details.

What do you think this means for Motorola? Are you excited to see what they will bring next to the table?