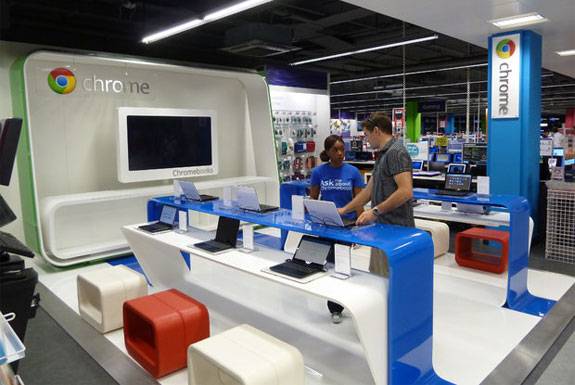 Here’s a juicy new rumor floating around this fine Friday afternoon. According to an “extremely reliable source” from the people over at 9to5Google it looks like the Mountain View company will be opening a few of their very own retail stores in the United States. Yup, like an actual store you can walk into and be greeted by fellow Googlers. Read on for more details.

Yes, this is apparently coming from extremely reliable sources that are extremely close to the situation, but we’ll still take it with a grain of salt for now. Apple has many of their own, Samsung’s recently jumped into the retail store waters, and now Google looks to be going the same route to get their devices in the eyes and hands of consumers. Interesting right?

The plan, is supposedly to get Google’s popular hardware like all those Nexus devices we love, Chromebooks, and possibly in our hands. Then even hands-on time and help with many of their smartphone and products from trained staff. Google’s slowly but surely offering more hardware, and this could just be one of many ideas for later this year. Apparently the plan was initially drew up after trying to decide how to get more of the general public interested in, and buying Google’s upcoming Project Glass. Being able to test out something of that magnitude (and price) would help sales. Then it only made sense to bring the wide array of Google devices into these stores.

You can bet there won’t be a “genius bar” but Googlers will be around to help with any questions, educate potential customers, and probably wearing some colorful gear as usual. Google currently has multiple Chrome Booths inside Best Buy spots around the US for their Chromebooks (as seen above) but the sales are all still handled by Best Buy. These new stores would almost be an extension of the Play Store, and you could walk in and buy the latest Nexus tablet, or even the rumored Motorola X-Phone right off the shelves.

The question now is whether or not we’ll see other Android smartphones sold in these stores, or even some Google gear and memorabilia. At Google I/O their store had Chrome pillows, Google Frisbee’s, coffee mugs and much more. Hopefully this comes true, because it would be awesome! I’ll be rooting for a retail store here in Vegas, but only time will tell.