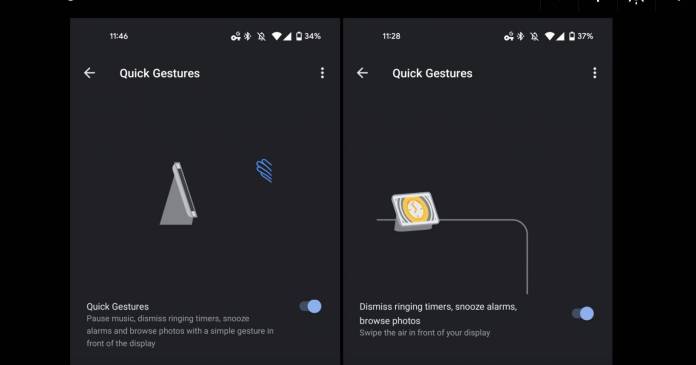 One of the selling points of the 2nd generation Nest Hub is Motion Sense which lets you have gesture capabilities without having to actually touch the display. This is through the power of Soli radar technology which lets you do QuickGestures like air tapping or swiping left or right. It looks like Google is set to add a third action that will be able to let you swipe through the air as you go through your photos. However this isn’t live yet and will still be coming soon.

According to 9 to 5 Google, the Google Home app lists a new action that will let users browse through photos by swiping through the air. Under Quick Gestures, there’s a new item that says you can “browse photos with a quick gesture in front of the display”. Previously, that part only mentions pausing music, dismissing ringing timers, and snoozing alarms but now they’ve added the upcoming action in there.

We say upcoming since it is not yet live on the Nest Hub 2nd generation that is running Cast firmware 1.56. Even if you have the Preview program enabled, you’re in the “waiting for the next preview firmware update”. When you go to the on-display settings, it only mentions timers and alarms but there is no recognition indicator in the top-right corner. They tested it out on both the Google Photos and the Art Gallery Photo Frame options.

Currently, the 2nd-gen Nest Hub supports two of the Quick Gestures. If you want to play or pause music, you hold your hand up in front of the display. And if you want to dismiss timers and snooze alarms, you wave your hand at your smart display. Meanwhile, the Pixel 4 and Pixel 4 XL also have a Soli-powered Motion Sense gesture which lets you skip or go back to a song while playing music by swiping left or right.

There’s no specific date yet when Google will be rolling out the third gesture to the Nest Hub 2nd generation. The bad news for first-gen owners is that Quick Gestures will not become part of their smart display since it relies on the Soli radar which their device doesn’t have.