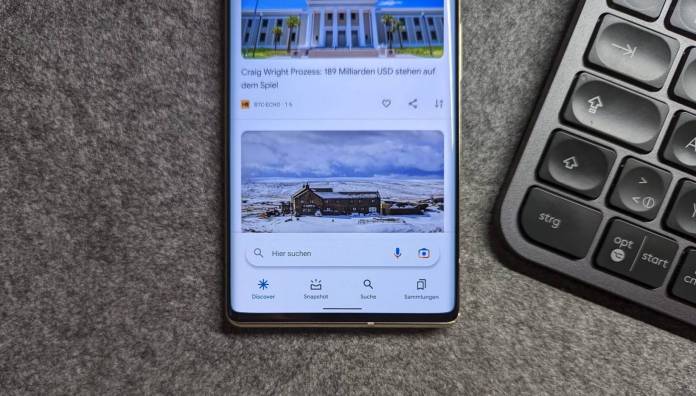 A lot of the mobile browsers now are giving users the option of putting their address bar on the bottom of the screen. This is because the increasingly large smartphone screens make it more convenient to have it there when using the device one-handed. It looks like Google is testing something out to that effect as some users are reporting seeing the search bar at the bottom of the screen. This is something similar to what they did with the Pixel Launcher years ago.

According to German website SmartDroid, Google seems to be testing out placing the search bar at the bottom of the screen. Currently, it’s located at the top of the screen, right under the Google logo or the Google Doodle of the moment. But now what some users are seeing is the search bar relocated just on top of the bottom bar. The bad news is that the bottom part of the bar already has the tabs for Discover, Snapshot, Search (again), and Collections. So it’s getting pretty cluttered there.

What some see is the search bar at the bottom when they open it but when you scroll up, it seems to disappear. When you scroll down, it reappears. We don’t know if this is something intentional or since they’re testing it out, some bugs may be responsible. Even force-stopping the app and clearing the cache seems to not “remove” this UI test so if you’re unfortunately part of the test group, you probably have to live with it for a while.

Having the search bar at the bottom of the screen improves reachability if you’re using your smartphone with one hand, especially if it’s one of those that have bigger screens. But maybe Google needs to rethink the whole bottom part of the Google app since having all of the tabs and the bar there makes it too cluttered. And since there’s a search button in the tabs already, it makes it pretty redundant. It’s a work in progress so let’s see how they work things out eventually.

Seeing the Search bar at the bottom of the Google app is a server-side update so there’s no way to force it on your app. We’ll see what Google comes up for the stable version eventually.