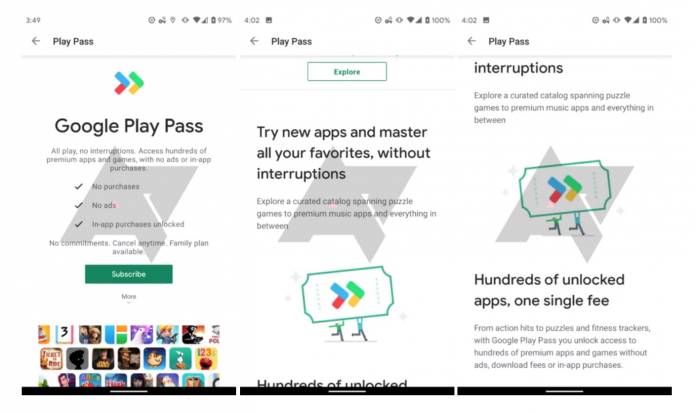 When Apple first announced that they will be launching a mobile game subscription for iOS devices called Apple Arcade, we probably expected that Google will come up with something similar for Android users. Sure enough late last year, some eagle-eyed tech sites spotted something that Google was working on called Play Pass. It looks like they’ve now gone beyond just the conceptual phase as they seem to be testing out an early version of the service even as the aforementioned Apple Pass still hasn’t officially gone live.

A reader sent screenshots to Android Police as they are apparently part of the small group that Google is testing this new service on. Based on the info page on the screenshots, the service will allow you to have access to everything in between games and premium music apps. It says that you’ll be able to download “hundreds of premium apps and games” without any ads, download fees, or in-app purchases.

Of course it’s not really free since it’s a subscription service. The screenshots show you’ll have to pay $4.99 a month to subscribe to Play Pass although you do have a 10-day free trial to check it out. However that isn’t the final price and it still might change for the lower or the higher before they roll it out officially. That will depend on how the market responds to the current price point and even more importantly, what are those premium apps and games that are included in your subscription.

A Google spokesperson confirmed that they are indeed testing out Play Pass but no other details were given. The screenshots only showed two of the games included which are Stardew Valley and Marvel Pinball. If you’ve been wanting to play those two games but didn’t want to pay $7.99 and $0.99 respectively, then you can probably check Play Pass out.

However, there’s no way for you to force your account to be part of their test subjects. So you’ll probably have to wait until you’re added or until they go into beta or even until they actually release it to the general public.