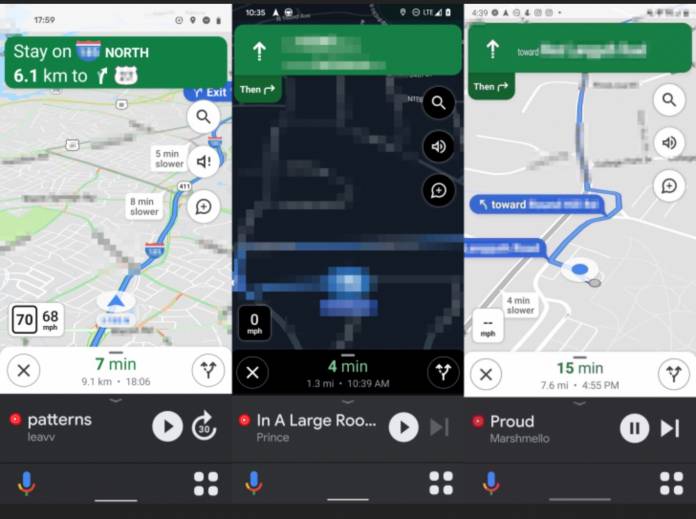 While drivers can already use Android Auto’s phone interface for their navigation, communication, and music needs while driving, it seems that Google is not yet satisfied with just that. Some users are reporting that their Google Maps interface is getting an in-car version. It is somewhat similar to the Auto interface but this one is based out of the Maps app itself. Another difference is that in Auto, you get to use Waze, which Google owns as well, as the navigation app.

Android Police shares that the in-car UI for Google Maps looks a lot like the Android Auto UI. There are two buttons in the bottom part, one for voice or calling up Google Assistant and the other to bring up the “home screen”. If you’re not in the navigation screen, you’ll also see a Maps icon at the bottom so you can quickly get back to it. Your music playback is above the bottom navigation and it has big icons and text so you can pause, play, forward easily.

The “home screen” button is where you will be able to see all the apps that you need or use often when you’re on the road (but still keeping your eye on the road). You have the call screen where you can see your top three contacts and three most recent calls, Messages, and your music apps with a dedicated YouTube Music button since Google wants you to use that more than Spotify or others (although there is a Spotify button there too).

Now as to what’s the purpose of a Google Maps in-car UI is still undetermined at this time. As mentioned, we already have an Android Auto phone UI anyway which will be eventually replaced with the Assistant Driving Mode. The latter was announced more than a year ago but we haven’t heard anything concrete about it since then. Are they going to continue with it or is the Maps in-car UI the replacement for it?

In any case, the new interface for Google Maps seems to be a server-side update as there are some users who are seeing it but not a lot are getting it on their apps. Let’s wait for a possible announcement from Google over the next few days.