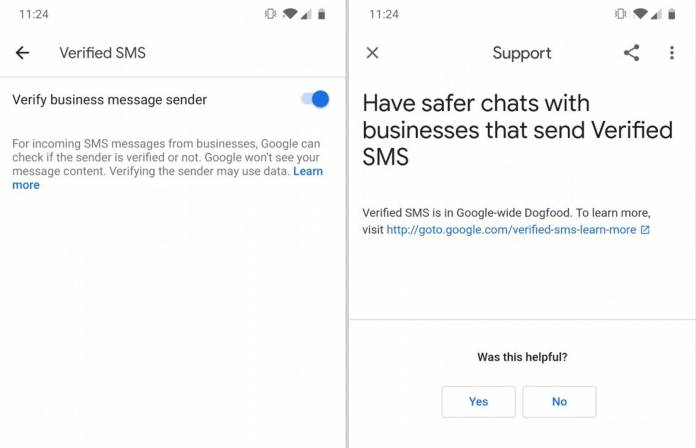 Google is fond of testing out features that they may or may not release later on. It’s a good sign that they’re constantly looking for new ways to improve the digital lives of their users. It looks like they’re trying out two new things for their Messages app: Verified SMS and SMS Reminders. As with all the other things that they test, it’s not a guarantee that it will be released so don’t get too attached to it.

The folks over at XDA Developers were able to enable these two new features so they can test it out for themselves. Verified SMS is similar to those blue checks that we see on social media accounts which means the user is verified and legit. This time around, it’s for businesses that are messaging you. Google says they won’t be able to see the message content themselves but just the numbers of the businesses.

There isn’t much information about how the feature will work but it’s probably Google counter-checking the numbers and see if they legitimately belong to a business, probably based on their database which includes Google My Business. The feature is described as providing “safer chats with businesses that send Verified SMS” so it’s intended to keep you safe from scams and phishing accounts.

SMS Reminders gives you a new button in the notification shade when you receive a new message. It says “remind me in 1 hr” in case you’re too busy to respond now but need to get back to that message later on. Of course you already have built-in notification snoozing if your phone is running Android 8.0 Oreo but it’s probably an alternative to that.

Since these two are still in the testing stage, there’s no information of course as to when they will officially arrive to Messages or even if they will actually become a reality. As always, we’ll let you know if they ever become Google official.