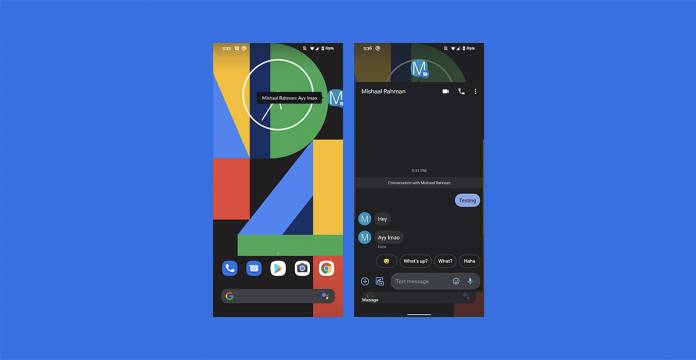 One of the things that Google originally intended for Android 10 was to have a bubbles notification feature. For some reason, despite testing it out in the beta versions, it didn’t make the final cut. But the Bubbles API is still currently in development and may be added to a future version of Android. They are now testing it out as well in the Google Messages app and if you know how to enable features in the Developer Options, you might be able to see how it works on your device.

Well, at least the folks over at XDA Developers found a way to enable the bubble notification feature and test it out on the Google Messages app. Once someone sends you a message there, a bubble appears at the edge of your display. You’ll see the picture of the one sending you the message and a preview of the message as well. If you don’t tap on it, the preview will disappear and will be replaced with a notification dot.

If you do tap it, it will open into an overlay and you can quickly reply to the sender without having to actually open the Messages app. Similar to Facebook Messenger’s bubble notification overlay, you can dismiss it by tapping and holding and then dragging it to the x icon at the bottom. When the feature finally rolls out and you’re not a fan of the bubbles, you can always go to the app settings and disable them by turning the Bubbles toggle off.

Google actually wants developers to try out the Bubbles API and see if this is something their apps can apply later on. They are planning to replace the overlay API soon so it should be worth checking out. Just go to the Settings > Developer Options > Bubbles and if you know how to play around with it, then you can test it out on your product.

There is no news yet when the feature will be officially adapted for the Google Messages app or when the Bubbles API will eventually get to Android devices. If you’re curious about how it all works, you can also check out Tasker to enable bubble notifications for your messages.