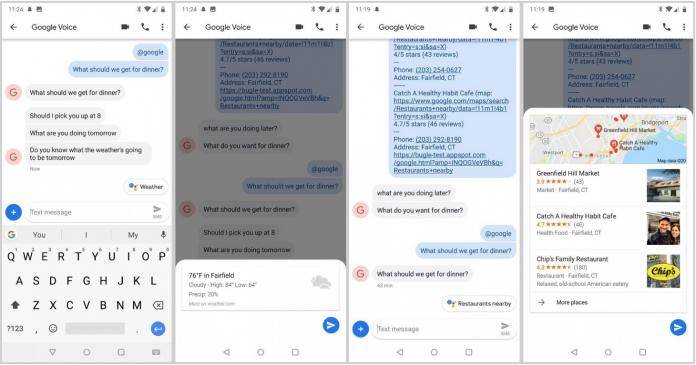 It looks like the days of Allo are truly numbered. While there has been no official announcement from Google yet, rumors are going around that the messaging app will soon go kaput. We’re seeing some features being ported out to other apps and now the fact that Google seems to be testing out an integration between Android Messages and Google Assistant is further proof that it will not be long for this world. However, this integration seems to still be in the early stages and still in the testing phase.

The folks over at XDA Developers have been able to make their Google Assistant and Android Message work together. It’s pretty much the same as when the digital assistant was able to work with Allo, except this time, there’s no voice component just yet. What you’ll see are suggestions from Google Assistant depending on the kind of conversation you’re having with your contact.

When weather was mentioned, it will give you information about the weather will be like on the specific day mentioned. When they were discussing dinner plans, Assistant had a list of nearby restaurants to suggest for you. It would really be better if you can interact with it through voice, but they may probably add that feature later on if those who are beta testing it will clamor for such a thing (which they probably will).

On paper, Allo was a great app as it had a lot of messaging features that people would normally like, not to mention the aforementioned Google Assistant integration. However, it came into an already over-saturated messaging market and Google itself had problems marketing it and differentiating from its other apps like Hangouts.

With Google recently introducing Chat as an RCS standard across Android phones, we will probably soon see Android Messages integrated with it as well and say goodbye to Allo. Hopefully Google gets its messaging act together soon.