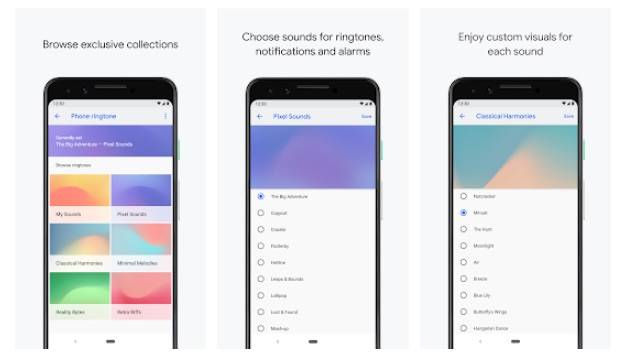 We weren’t exactly clamoring for Google to come up with a separate app to manage all the sounds coming from your Android device, but here we are with the brand new Sounds app. The description says the app will be able to help users choose their favorite sounds when they set their alarms, ringtones, and notifications. It is basically a Google Play version of the Sounds menu that is found in Pixel devices but has also been redesigned to be more visually appealing.

While some Pixel users were already able to install the app, it looks like it has been pulled from the Google Play Store for now. This is probably because the redesign wasn’t being seen by users who’ve already installed it and what it looks like on the Play Store page isn’t being seen yet. They will probably put it back on either with the December update or just when they’re able to fix the bug.

But basically, what the app does is to let users choose their own sounds or the pre-set sounds when it comes to their notifications, alarms, and ringtones. In addition, users will also be able to select the accompanying visuals to these sounds just so you can have a more “visually simulated” user interface when your alarm clock goes off or when your phone rings. It might be a problem if you receive a lot of notifications though since you might get visually overstimulated.

The app will be available for other Android devices, but as always, Pixel owners will have some specific sounds and ringtones only for them. The app is expected to go live with the December Security Update so as to when you will receive it is anyone’s guess as the schedule for the release of these updates usually change.