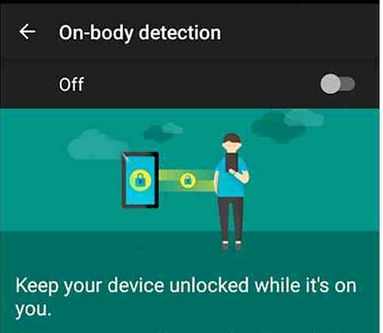 Don’t you just hate it when you suddenly leave your smartphone unlocked on a table and people start posting unwanted stuff on your social media just to annoy or embarrass you? Or worse, when people have the nerve to steal your unlocked device left somewhere out there? Well, if Google does roll out this new feature to all Android devices, then your problems may be partly solved. They can’t help you if you’re too forgetful and leave your phone a lot.

The new smart locked mode is called on-body detection and some users have already, uhm, detected that their smartphones have this feature already. It keeps your phone locked if your accelerometer detects that you are not holding it or it’s not in your pocket, like on a table somewhere. However, if you’re holding it unlocked and you give it to another person, it will still stay unlocked because it won’t be able to detect whether you yourself is holding it, only if it’s being held, pocketed or placed down. So if you’re forced to hand over your phone to someone else and it’s unlocked, then this feature will not do you any good.

It seems that the feature was first noticed on a Nexus 4 running on Android 5.0.1, but now it looks to be spreading to other Nexus devices. It also looks like you need to be running Lollipop for it to work, although it may not be part of the core OS at all. You would also probably need to be running the latest version of Google Play Services as well.

There isn’t any word yet on whether this will be available on other Android devices as well, so let’s just wait and see for the official announcement. Meanwhile, if you have it on your Nexus already, feel free to share what effect it has had on your usage, if any.