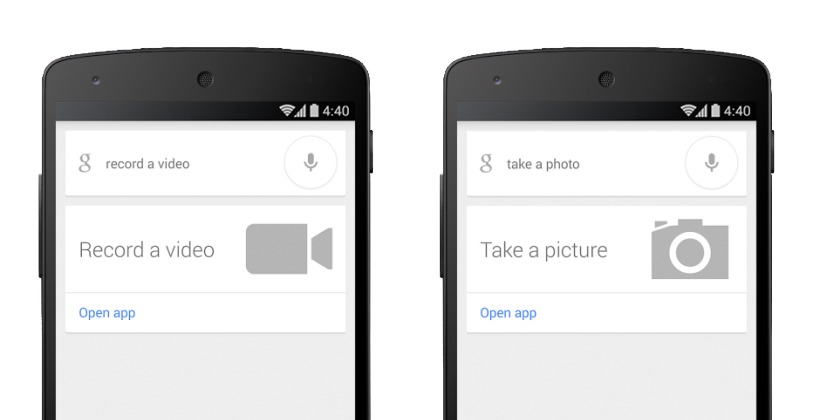 Google has just rolled out a rather strange new feature to its Google Search app for Android. Starting with the latest update, users will be able to verbally tell Google Now to open up their camera to snap up a photo or record a video.

The way it works is quite straightforward. Simply activate Google Search’s voice recognition and say “take a picture” or “take a video” or any other recognized combination of words. Google will then launch the camera app in the correct mode, for stills or for video recording. This feature might make more sense in devices that have always-on Google Now access, like say the Nexus 5, but the mystery begins when using it with other devices.

See, the new feature doesn’t actually take the shot or start recording. It only opens up the camera app. Supposedly this is for convenience, but it makes the feature almost practically useless and, in most cases slower than other means, especially for those devices or ROMs that have shortcuts for launching the Camera app right on the lockscreen. You might be able to also control the camera by voice, provided the default camera app you are using supports that, which makes for an accessibility argument for the feature.

Several theories have been thrown around regarding this new feature, but most of them revolve around Google’s focus on wearables. One holds that this might be clues that Google is near to rebasing Google Glass on Android 4.4, though this new Google Now feature actually works on Android Jelly Bean as well. Another theory is that this paves the way of adding such voice-controlled functionality to the recently announced Android Wear platform. At the moment, however, the voice-activated feature might be useless and slower for many, but it at least offers an alternative for those that don’t have access to similar or more convenient features.