One of the most “awaited” reports every quarter, (at least for those concerned with the device’s performance) is the Avast Android App Performance & Trend Report. They’ve released their Q1 findings and it looks like Samsung and Google apps, both in the run at start-up and run by user categories, are the clear winners. Google has 8 apps in the two lists while Samsung has seven. There are also six first-timers in the quarterly list. Avast also includes some tips on how to deal with some of the apps, including how to uninstall them.

In the run at start-up category, Samsung AllShare is the most draining app of them all. Google Talkback, an accessibility service for the vision-impaired users, is a new entry and it seems to be eating up your memory even if you’re not using it since third-party apps toggle it on. Avast suggests manually toggling it off if you don’t use it for specific apps. Google Play Music also made it to the list for the first time because of the ad blockers which cause drains. 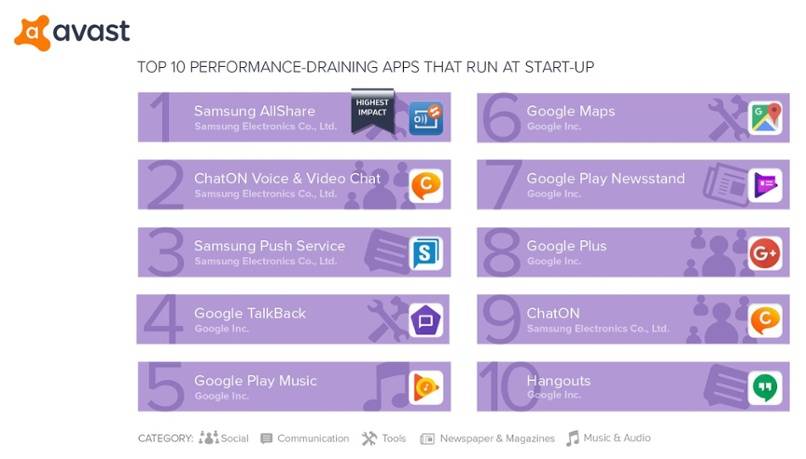 For the ten performance draining apps run by users, Samsung is top again with its WatchOn app. But there are four newcomers to the list: ShareIt (lets you share huge files to other mobile users), Google Docs, Samsung Media Hub (discontinued already so users should uninstall them already), and Piano Tiles 2 (just don’t play it if you need to conserve battery or data or memory). 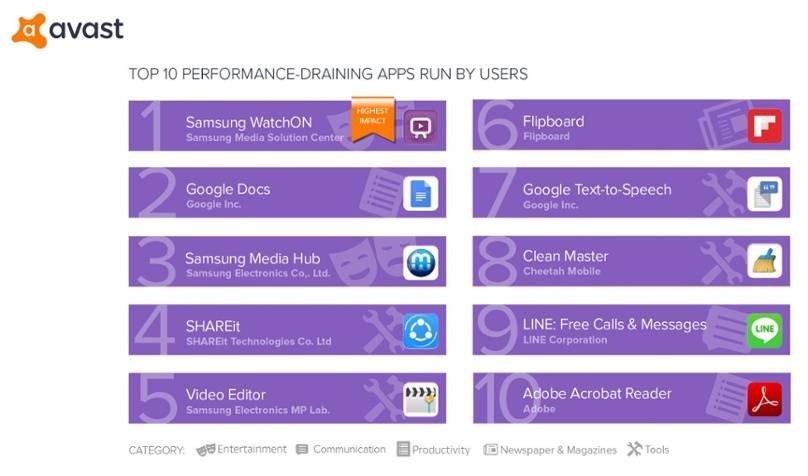 Google and Samsung’s prominence in the list is probably due to the fact that a lot of their apps are pre-installed on Android devices, hence the term bloatware. Of course Avast promotes their own products like AVG Cleaner to help you manage your resource-hogging apps, but you can also do it manually if you prefer.